The photoelectric effect by Hertz, Compton effect by Compton, and Stark effect by Stark were discovered in the 20th century and were explained by the quantum theory of light. According to which, the light consists of packets of energy. Each packet of energy is called a photon or quantum of light (= hυ) where h is Planck’s constant, υ is the frequency of light, c is the velocity of light and these packets of energy travel in straight line with the speed of light.

Hence, it was concluded that light is of dual nature as some phenomena were explained by the wave theory of light and some by particle nature of light, In this unit, we shall study the dual nature of radiation and matter.

If it has got sufficient energy to overcome the attractive pull then only the electron can come out of the metal surface. This phenomenon of emission of electrons from the metal surface is called electron emission.

To pull out electrons from the surface of the metal, a certain minimum amount of energy is required. This minimum energy required by the electron is called the work function of the metal. Work function is generally denoted by 'w' and measured in eV (electron volt).

The minimum frequency of light that can emit photoelectrons from a material is called threshold frequency or cut-off frequency of that material.

The process of emission of electrons when a metal is heated is known as thermionic emission. The emitted electrons are called thermions. Emitted number of thermions depends on the temperature of the metal surface.

The process of emission of electrons when the light of suitable frequency is incident on a metal surface is known as photoelectric emission. These photo-generated electrons are called photoelectrons. The number of photoelectrons emitted depends on the intensity of the incident light.

The phenomenon of photoelectric emission was discovered in 1887 by Heinrich Hertz while studying experimentally the production of electromagnetic waves by means of spark discharge. He found that when the emitter plate was illuminated by ultraviolet light, high-voltage sparks across the detector loop were enhanced. This observation led him to conclude that light facilitated the emission of some electrons.

From this, it was concluded that when suitable radiation falls on a metal surface, some electrons near the surface absorb enough energy from the incident radiation to overcome the attraction of the positive ions in the material of the surface.

It consists of an evacuated glass or quartz tube having two electrodes. Electrode ‘C’ is a photosensitive plate, which emits photoelectrons when exposed to ultraviolet radiation. The electrode ‘A’ is a charge-collecting plate. The tube has a side window, which will allow the light of a particular wavelength to pass through it and falls on the photosensitive plate ‘C’. 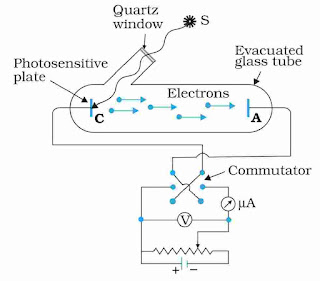 The window is made of quartz covered with a filter. The electrons collected by plate A (collector), are emitted by the plate C. Battery creates the electrical field between collector and emitter. The potential difference between plates C and A is maintained by the battery, which can be varied.

From a commutator, the polarity of the plates C and A can be reversed. Thus with respect to emitter C, plate A can be maintained at a desired positive or negative potential. The electrons are attracted, when the collector plate A is positive with respect to the emitter plate C. Electron emission causes the flow of electric current in the circuit.

Voltameter (V) measures the potential difference between the emitter and collector plates. Microammeter (μA) measures the resulting photocurrent flowing in the circuit. The current flowing in the circuit can be increased or decreased by varying the potential between collector plate A and emitter plate C. We can also vary the intensity and frequency of the incident light.

(i). Effect of Intensity

According to this, photoelectric current for a fixed frequency increases with an increase in the potential applied to the collector.

The photoelectric effect thus gave evidence to the strange fact that light in interaction with matter behaved as if it was made of quanta or packets of energy, each of energy hv. A definite value of energy, as well as momentum, is associated with a particle. This particle was later named photon.

We can summarise the photon picture of electromagnetic radiation as follows:

The wave nature of light shows up in the phenomena of interference, diffraction, and polarisation. De Broglie proposed that the wavelength λ associated with a particle of momentum p is given as

The wave nature of electrons was first experimentally verified independently by C. J. Davisson and L. H. Germer in 1927 and by G. P. Thomson in 1928 while observing diffraction effects with beams of electrons scattered by crystals. The experimental arrangement is schematically shown in the figure. 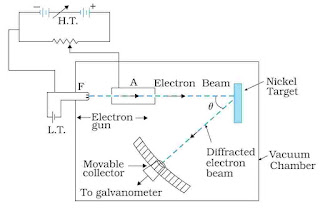 It has an electron gun made up of a tungsten filament F, heated by a low voltage battery and the filament is coated with barium oxide. Emitted electrons from filament are accelerated to a desired velocity by applying the required potential/voltage from a high-voltage power supply. C is a hollow metallic cylinder with a hole along the axis and is kept at a negative potential to get a convergent beam of electrons emitted from the filament. It acts as a cathode. A is a cylinder with a fine hole along its axis acting as an anode.

The cathode and anode form an electron gun by which a fine beam of electrons can be obtained at different velocities by applying different accelerating potentials. N is a nickel crystal cut along a cubical diagonal, and D is an electron detector that can be rotated on a circular scale and is connected to a sensitive galvanometer that records the current.

Working: From the electron gun a fine beam of accelerated electrons is made to fall normally on the surface of the nickel crystal. The atoms of the crystal scatter the incident electrons in different directions. The detector detects the intensity of the electron beam scattered in a particular direction by rotating the electron detector on the circular scale at different positions.

According to de Broglie's hypothesis, the wavelength of the wave associated with the electron is given by