In this chapter, we will study various atomic models. Initially, J.J. Thomson proposed an atomic model in which he thought of as electrons embedded in between protons. In 1911, his student Earnest Rutherford proposed a nuclear model, on the basis of a scattering experiment. In spite of strong experimental evidence, Rutherford’s model of the atom was rejected on the ground of the classical theory of electromagnetism.

So in order to rectify the shortcomings of Rutherford’s model, in 1913, Niels Bohr combined the classical and early quantum concepts of Einstein and Plank to explain the stability of an atom.

According to Thomson, "An atom consists of positively charged matter, into which negatively charged particles are embedded randomly". But this model did not last long as it could not explain the observations of Rutherford's alpha-particle scattering experiment.

In 1911, Rutherford, along with his assistants, H. Geiger and E. Marsden, performed the Alpha Particle scattering experiment, which led to the birth of the ‘nuclear model of an atom’.

They took a thin gold foil having a thickness of 2.1×10-7 m and placed it in the center of a rotatable detector made of zinc sulfide and a microscope. Then, they directed a beam of 5.5MeV alpha particles emitted from a radioactive source at the foil. Lead bricks collimated these alpha particles as they passed through them. 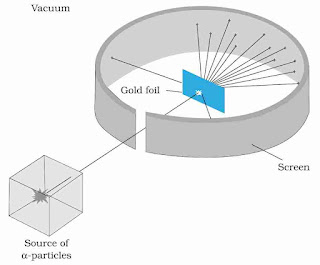 After hitting the foil, the scattering of these alpha particles could be studied by the brief flashes on the screen. Rutherford and his team expected to learn more about the structure of the atom from the results of this experiment.

Here is what they found:

Bohr Model of the Hydrogen Atom

It was Niels Bohr (1885-1962) who used the concept of quantized energy and explained the model of a hydrogen atom in 1913. Bohr combined classical and early quantum concepts and proposed a theory in the form of three postulates. These postulates are:

Ground State and the Excited States

The Line Spectra of the Hydrogen Atom

Bohr’s model explains the spectral lines of the hydrogen atomic emission spectrum. While the electron of the atom remains in the ground state, its energy is unchanged. When the atom absorbs one or more quanta of energy, the electron moves from the ground state orbit to an excited state orbit that is further away. When the atom relaxes back to a lower energy state, it releases energy that is again equal to the difference in energy of the two orbits.

Based on the wavelengths of the spectral lines, Bohr was able to calculate the energies that the hydrogen electron would have in each of its allowed energy levels. He then mathematically showed which energy level transitions corresponded to the spectral lines in the atomic emission spectrum.

The general formula for wavelength of emitted radiation is given by 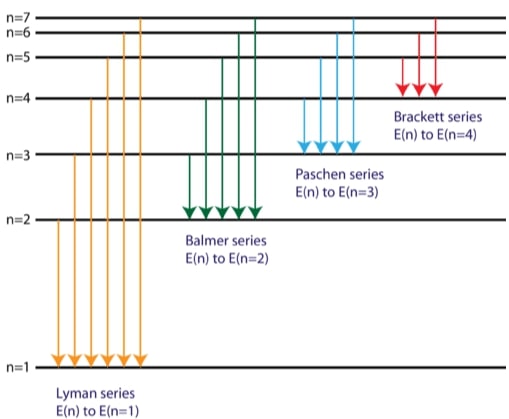 de-Broglie explained the second postulate of Bohr’s atomic model by assuming an electron to be a particle wave. Therefore, it should form standing waves under resonance conditions. 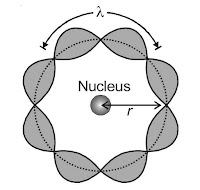 According to de-Broglie, for an electron moving in nth circular orbit of radius r,