Q 1:- Define impact parameter. Ans:- Impact parameter of an alpha particle is defined as the perpendicular distance of the velocity vector of α-partic

Science is a complex and challenging subject, as it involves so many principles and concepts that are difficult to memorize. Those student who opt for science have to face many challenges and work hard to get good marks in the exam. In this lesson, students will learn about Atoms. The best solution of the problem is to practice as many Physics Class 12 Chapter 12 Important Questions as possible to clear the doubts. 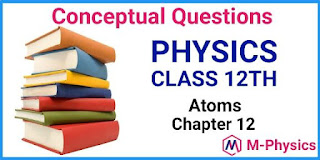 Q 1:- Define impact parameter.
Ans:- Impact parameter of an alpha particle is defined as the perpendicular distance of the velocity vector of α-particle from the central line of gold nucleus, when it is far away from gold nucleus.

Q 4:- What is the main feature of Rutherford's nuclear atom model?
Ans:- Rutherford's atom is an electrically neutral sphere consisting of a very small massive and positively charged nucleus at the centre surrounded by revolving electrons in their respective orbits. The requisite centripetal force for orbital motion of electrons is provided by coulombian attractive force between nucleus and the revolving electron.

Q 8:- Define ionisation energy. What is its value for a hydrogen atom?
Ans:- The minimum amount of energy required to free the valence electron from its ground state in an atom is called 'ionisation energy' for that atom/element. Ionisation energy of hydrogen is +13.6 eV.

Q 11:- What are hydrogenic atoms? Give examples too.
Ans:- Hydrogenic atoms are the atoms consisting of a nucleus with positive charge +Ze and a single electron, where Z = proton number (atomic number) of the nucleus. Hydrogen atom (H), singly ionised helium (He+), doubly ionised lithium (Li++), etc., are the examples of hydrogenic atoms.

Q 15:- Bohr assumed that nucleus is fixed. Was this assumption correct? If not, what is the error in Bohr's predicted values for frequencies of the spectral lines?
Ans:- Truely speaking, nucleus of an atom is not fixed. When energy is emitted due to electronic transition from one energy state to another, there is recoil motion of nucleus too. However, as mass of nucleus is extremely large as compared to the mass of electron, the recoil speed of nucleus is very small and may be neglected. Therefore, practically, nucleus may be considered to be stationary.

Q 17:- What is the difference between emission spectrum and absorption spectrum of an atomic gas?
Ans:- When an atomic gas is excited at low pressure, the emitted radiation is emission line spectrum which consists of bright lines on a dark background. Each bright line corresponds to a particular frequency/ wavelength.

(b) As per Bohr atom model, the frequencies of radiation emitted are discrete. The radiation frequency is equal to the difference between the energies in two states (initial and final) of electron divided by Planck's constant h.

Q 21:- Although a hydrogen atom has only one electron yet its spectrum has many lines. Explain why.
Ans:- According to Bohr atom model, emission of a radiation photon of characteristic frequency takes place whenever the electron of hydrogen atom shifts from a higher energy excited state to another lower energy excited state or ground state. Depending upon the degree of excitation, so many transitions like (2-1), (3-2), (4-2), (4-1), etc., are possible. Each transition gives a spectral line of characteristic frequency. Thus, we obtain a large number of spectral lines in hydrogen spectrum irrespective of the fact that it has only one electron in an atom.

Q 24:- Answer the following questions, which help you understand the difference between Thomson's model and Rutherford's model better.

(a) Is the average angle of deflection of α-particles by a thin gold foil predicted by Thomson's model much less, about the same, or much greater than that predicted by Rutherford's model?

(c) Keeping other factors fixed, it is found experimentally that for small thickness t, the number of α-particles scattered at moderate angles is proportional to t. What clue does this linear dependence on t provide?

(b) The probability of backward scattering of a-particles as predicted by Thomson's model is much less than that predicted by Rutherford's model.

Q 25:- If Bohr's quantisation postulate (angular momentum `=\frac{nh}{2\pi}` is a basic law of nature, it should be equally valid for the case of planetary motion also. Why then do we never speak of quantisation of orbits of planets around the sun?
Ans:- If one applies Bohr's quantisation principle for planetary motion (say, Earth), then value of principal quantum number n = 1070. For such large values of n, the difference in angular momenta and energy between successive levels is meaningless and we may consider angular momenta as well as energy levels as continuous ones.