We considered all charges whether free or bound to be at rest in the previous two chapters. Charges in motion constitute an electric current. Lightning is one of the natural phenomena in which charges flow from clouds to earth through the atmosphere.

In this chapter, we will study some basic laws concerning steady electric current and their applications.

The current density at any point in a conductor is the ratio of the current at that point in the conductor to the area of the cross-section of the conductor. It is a vector quantity and denoted by `\vec{J}`.

The SI unit of current density is A/m2.

Drift Velocity is defined as the average velocity with which the free electrons move towards the positive end of a conductor under the influence of an external electric field applied. It is denoted by vd.

Let, cross-sectional area of any conductor be A, the number of electrons per unit area be n, drift velocity be vd, then the number of total moving electrons in t second will be

Putting i = neAvd in above equation

According to this law, "At constant temperature, the potential difference V across the ends of a given metallic wire (conductor) in a circuit (electric) is directly proportional to the current flowing through it". i.e.,

where, R = resistance of conductor

Mobility is defined as the magnitude of the drift velocity per unit of the electric field. It is denoted by μ,

Resistance is the ratio of the potential difference applied across the ends of the conductor to the current flowing through it.

Resistivity is defined as the ratio of the electric field applied at the conductor to the current density of the conductor. It is denoted by ρ

The constant of proportionality ρ depends on the material of the conductor but not on its dimensions. ρ is known as resistivity or specific resistance.

Conductivity is defined as the reciprocal resistivity of a conductor. It is expressed as,

The resistivity of certain metals or alloys drops to zero when they are cooled below a certain temperature is called superconductivity.

When an electric current is moved in an electric circuit, then the energy of work done by taking a charge from one point to another point is called electric energy.

If a charge q at potential difference V is moved from one point to another point, then doing work will be

Electric power is the rate of doing work by electric charge. It is measured in watt and represented by P. 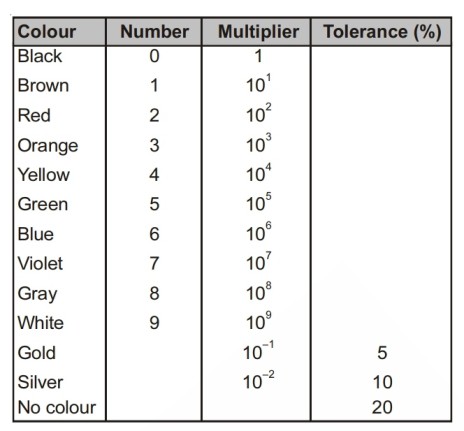 A carbon resistor has a set of coaxial coloured rings in them, whose significance is listed in the above table. First two bands formed; the First two significant figures of the resistance in ohm. Third band; Decimal multiplier as shown in the table. Last band; Tolerance or possible variation in percentage as per the indicated value. For Gold ±5%, for silver ±10% and for No colour ± 20%.

There are two types of resistance combinations.

In Series Combination, different resistances are connected end to end. Equivalent resistance can be obtained as the formula,

NOTE: The total resistance in parallel combination is less than the least resistance of the circuit.

An electrolytic cell consisting of two electrodes, called positive (P) and negative (N) immersed in an electrolytic solution as shown in the figure. 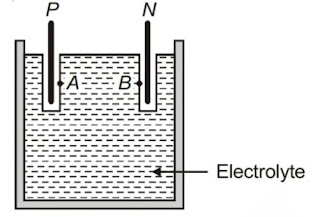 It is the opposition offered by the electrolyte of the cell to the flow of current through itself. It is represented by r and given by

Cells in Series and Parallel

Kirchhoff’s two rules are used for analysing electric circuits consisting of a number of resistors and cells interconnected in a complicated way. 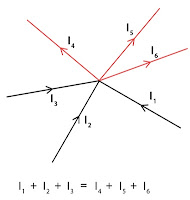 The algebraic sum of changes in potential around any closed loop involving resistors and cells in the loop is zero.

It is an application of Kirchhoff’s rules. The bridge is consisting of four resistances R1, R2, R3 and R4 as four sides of a square ABCD as shown in the figure. 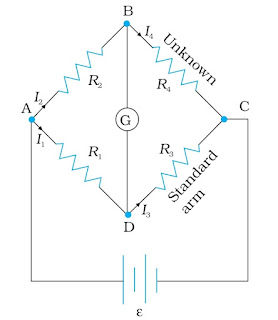 Currents through all resistances and galvanometer are as shown in figure. In balanced Wheatstone bridge we consider the special case Ig = 0. Applying junction rule to junction B and D, we have

The equation (iii) relating the four resistors is called the balance condition for the galvanometer to give zero or null deflection.

It is the practical application of the Wheatstone bridge. A standard wire AC of length one metre and of uniform cross-sectional area is stretched and clamped between two thick metal strips bent at right angles as shown in the figure. 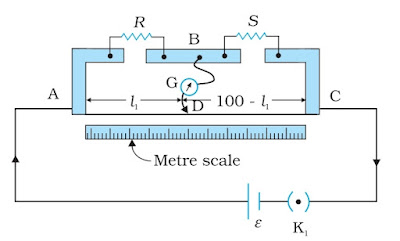 The percentage error in R can be minimised by adjusting the balance point near the middle of the bridge (i.e., l1 is closed to 50 cm) by making a suitable choice of S.

It is a versatile instrument consisting of a long piece of uniform wire AC across which a standard cell B is connected. more