In the previous chapter, we have learnt about "Units and Measurement". In this chapter, we shall focus Motion in a Straight Line. Kinematics is the study of motion of physical bodies without going into the cause of its motion. In kinematics we deal with physical quantities like distance, displacement, speed, velocity and acceleration. Motion is common to everything in the universe. It is change in position of an object with time.

The earth rotates once every twenty-four hours and revolves round the sun once in a year. The sun itself is in motion in the Milky Way, which is again moving within its local group of galaxies. In this chapter, we shall study about Motion under Straight Line.

A frame with respect to which an observer observes the position and motion of an object is known as reference frame. For example if an observer observes the motion of an object while standing on earth then his frame of reference is earth. To describe the motion mathematically with respect to a frame of reference, a system of coordinates axis fixed on the reference frame is taken which are named as x, y and z-axis. 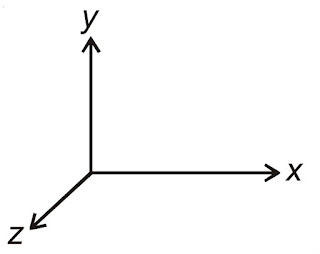 ▶Concept of Position, Distance and Displacement

We define distance as the actual path length traversed by a particle during its motion in a given interval of time. Distance is a scalar quantity as it has only magnitude and no direction. SI unit of measurement of distance is metre.

Displacement of a particle is the shortest distance between the initial and final position of the particle in a particular direction. It is a vector quantity and its SI unit of measurement is metre. The magnitude of displacement is always less than or equals to the total distance i.e.,

If a particle is moving along a straight line without changing the direction of motion then the distance and magnitude of displacement are equal.

▶Difference between Distance and Displacement

Average speed, is defined as the total distance traveled divided by the total time interval during which the motion has taken place. The SI unit of speed is m/s.

▶Difference between Speed and Velocity

and the limit of the ratio Δx/Δt as Δt approaches to zero is called the derivative of x w.r.t. t and is written as dx/dt .

Similarly instantaneous speed is the speed at a particular time.

The velocity of one object w.r.t. other is known as relative velocity. So, we concluded that, if A and B are moving along the same direction then,

If A and B are moving in opposite directions then,

By the definition of acceleration,

Integrating both sides we get,

As acceleration is constant, therefore it comes out of integral.
Let at t = 0, initial velocity of particle is u and its final velocity at time t is v.

By the definition of velocity,

In the above equation, v is not independent of t. So we replace the value of v by v = u + at

Let at t = 0, initial position of particle is 0 and its final position at time t is x from the chosen reference frame.

Again we can write,

where s = (x) is the displacement of the particle.

A freely falling object is any object moving freely under the influence of gravity alone, regardless of its initial motion. Objects thrown upward or downward and those released from rest are all falling freely once they are released. Any freely falling object experiences an acceleration directed downward, regardless of its initial motion. We shall denote the magnitude of the free-fall acceleration by the symbol g.