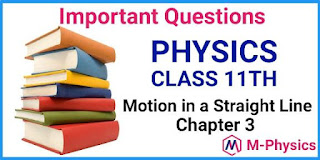 Q.2. Under what condition will the distance and displacement of a moving object will have the same magnitude?
Ans. When the object moves along a straight line and always in the same direction.

Q.4. Can a particle in one dimensional motion with zero speed may have non zero velocity?
Ans. No, it is because speed of a particle is equal to magnitude of its velocity.

Q.5. Is it possible for a body to be accelerated without speeding up or slowing down. If it is so give an example.
Ans. Yes, When a body is rotated along a circular path with uniform angular speed, its speed is constant but it has a varying velocity. The change in velocity occurs due to a continuous change in its direction of motion.

Q.6. What will be the nature of position-time graph for uniform motion?
Ans. It will be a straight line, inclined with time axis.

Q.11. Can position-time graph have a negative slope?
Ans. Yes, It happens, when the velocity of the object is negative.

Q.14. Can a particle in one dimensional motion with zero speed at any instant may have a non-zero acceleration at that instant?
Ans. Yes for example consider that a body is thrown vertically up at the highest point the body possesses zero velocity and finite acceleration (g = 9.8 ms-2).

Q.20. Two balls of different masses (one lighter and other heavier) are thrown vertically upward with same initial speed. Which one will rise to the greater height?
Ans. Both the ball will rise to the same height. It is because, for a body moving with given initial velocity and acceleration, the distance covered by the body does not depend on the mass of the body.

Q.21. When will the relative velocity of two moving bodies be zero?
Ans. When the two bodies are moving with equal velocities (i.e. same speed and in the same direction).

Q.22. Rest and motion are relative terms. Explain
Ans. Absolute rest and absolute motion have got no meaning as such. For example, two persons sitting in a moving bus at rest w.r.t each other but are in motion w.r.t. a person standing on the roadside. Further, trees, buildings, etc. on the surface of the earth appears to be at rest. In fact they are in motion as the Earth revolves around the sun. Thus, there is no object which can be considered to be at absolute rest. Hence, rest and motion are relative terms.

Q.23. Given below are some examples of motion. State in each case, if the motion is one, two or three dimensional: (a) a kite flying on a windy day (b) a speeding car on a long straight highway (c) an insect crawling on a globe (d) a carrom coin rebounding from the side of the board (e) a planet revolving around its star.
Ans.

Q.25. Distinguish between distance and displacement.
Ans. Following are the points of difference between the displacement and distance :

Q.28. A particle in one dimensional motion with positive value of acceleration must be speeding up. Is it true? Explain.
Ans. The answer depends on the choice of the positive direction of position axis.

On the other hand, when a body is projected vertically upwards and the positive direction of position-axis is regarded as to be opposite the direction of motion, the body slows down, instead of speeding up.

Q.33. A man standing on the edge of a cliff throws a stone straight up with initial speed u and then throws another stone straight down with same initial speed u and from the same position. Find the ratio of speeds, the two stones would attain, when they hit the ground at the base of the cliff.
Ans. When the stone is thrown up with speed u, it will rise up, till its speed becomes zero and then will start falling down. It can be proved that when the stone reaches the thrower, it will acquire the same speed u, with which it was thrown up.

Since both the stones are falling under gravity with the same initial speed u, the two stones will head the ground with the same speed and hence the ratio of their speed is 1.

Q.34. What condition should be satisfied for vectors to be equal?
Ans. Two vectors are said to be equal, if they have (i) the same magnitude and (ii) the same direction.

Q.36. Can we add velocity vector to the displacement vector?
Ans. No, The vectors having the same nature only can be added.

Q.38. What is a resultant vector?
Ans. The resultant of two (or more) vectors is a single vector, which produces the same effect as the individual vectors together produce.

Q.39. Can the flight of a bird be an example of composition of vectors?
Ans. Yes. When a bird has to fly, it presses air with its two wings along the oblique directions. The resultant of the reaction on the two wings of the bird enables it to fly up in the sky.

The resultant of two vectors not in one plane may be zero.

Three vectors lying in a plane can give zero resultant.

So as to protect himself from the rain, he holds the umbrella inclined to the vertical in the direction of apparent velocity of the rain with respect to himself.