Definition:- Semiconductor memory is the main memory element of a microcomputer-based system and is used to store program and data. The main memory elements are nothing but semiconductor devices that stores code and information permanently. The semiconductor memory is directly accessible by the microprocessor. And the access time of the data present in the primary memory must be compatible with the operating time of the microprocessor.

Thus semiconductor devices are preferred as primary memory. With the rapid growth in the requirement for semiconductor memories there have been a number of technologies and types of memory that have emerged. Names such as ROM, RAM, EPROM, EEPROM, Flash memory, DRAM, SRAM, SDRAM, and the very new MRAM can now be seen in the electronics literature. Each one has its own advantages and area in which it may be use.

Electronic semiconductor memory technology can be split into two main types or categories, according to the way in which the memory operates : 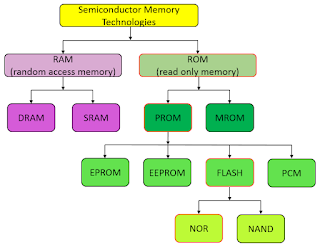 There is a large variety of types of ROM and RAM that are available. These arise from the variety of applications and also the number of technologies available. This means that there is a large number of abbreviations or acronyms and categories for memories ranging from Flash to MRAM, PROM to EEPROM, and many more. The different memory types or memory technologies are detailed below:

As the names suggest, the RAM or random access memory is a form of semiconductor memory technology that is used for reading and writing data in any order - in other words as it is required by the processor. It is used for such applications as the computer or processor memory where variables and other storage are required on a random basis. Data is stored and read many times to and from this type of memory.

Dynamic RAM is a form of random access memory. DRAM uses a capacitor to store each bit of data, and the level of charge on each capacitor determines whether that bit is a logical 1 or 0. However these capacitors do not hold their charge indefinitely, and therefore the data needs to be refreshed periodically. As a result of this dynamic refreshing it gains its name of being a dynamic RAM.

DRAM is the form of semiconductor memory that is often used in equipment including personal computers and workstations where it forms the main RAM for the computer. The semiconductor devices are normally available as integrated circuits for use in PCB assembly in the form of surface mount devices or less frequently now as leaded components.

SRAM is stands for Static Random Access Memory. This form of semiconductor memory gains its name from the fact that, unlike DRAM, the data does not need to be refreshed dynamically. These semiconductor devices are able to support faster read and write times than DRAM (typically 10 ns against 60 ns for DRAM), and in addition its cycle time is much shorter because it does not need to pause between accesses.

However they consume more power, they are less dense and more expensive than DRAM. As a result of this SRAM is normally used for caches, while DRAM is used as the main semiconductor memory technology.

Synchronous DRAM. This form of semiconductor memory can run at faster speeds than conventional DRAM. It is synchronized to the clock of the processor and is capable of keeping two sets of memory addresses open simultaneously. By transferring data alternately from one set of addresses, and then the other, SDRAM cuts down on the delays associated with non-synchronous RAM, which must close one address bank before opening the next.

Within the SDRAM family there are several types of memory technologies that are seen. These are referred to by the letters DDR - Double Data Rate. DDR4 is currently the latest technology, but this is soon to be followed by DDR5 which will offer some significant improvements in performance.

This is Magneto-resistive RAM, or Magnetic RAM. It is a non-volatile RAM memory technology that uses magnetic charges to store data instead of electric charges. Unlike technologies including DRAM, which require a constant flow of electricity to maintain the integrity of the data, MRAM retains data even when the power is removed.

An additional advantage is that it only requires low power for active operation. As a result this technology could become a major player in the electronics industry now that production processes have been developed to enable it to be produced.

For example, the BIOS of a computer will be stored in ROM. As the name implies, data cannot be easily written to ROM. Depending on the technology used in the ROM, writing the data into the ROM initially may require special hardware. Although it is often possible to change the data, this gain requires special hardware to erase the data ready for new data to be written in.

This stands for Programmable Read Only Memory. It is a semiconductor memory which can only have data written to it once, the data written to it is permanent. These memories are bought in a blank format and they are programmed using a special PROM programmer. Typically a PROM will consist of an array of fuseable links some of which are "blown" during the programming process to provide the required data pattern.

The PROM stores its data as a charge on a capacitor. There is a charge storage capacitor for each cell and this can be read repeatedly as required. However it is found that after many years the charge may leak away and the data may be lost. Nevertheless, this type of semiconductor memory used to be widely used in applications where a form of ROM was required, but where the data needed to be changed periodically, as in a development environment, or where quantities were low.

This is an Erasable Programmable Read Only Memory. This form of semiconductor memory can be programmed and then erased at a later time. This is normally achieved by exposing the silicon to ultraviolet light. To enable this to happen there is a circular window in the package of the EPROM to enable the light to reach the silicon of the chip. When the PROM is in use, this window is normally covered by a label, especially when the data may need to be preserved for an extended period.

This is an Electrically Erasable Programmable Read Only Memory. Data can be written to it and it can be erased using an electrical voltage. This is typically applied to an erase pin on the chip. Like other types of PROM, EEPROM retains the contents of the memory even when the power is turned off. Also like other types of ROM, EEPROM is not as fast as RAM. EEPROM memory cells are made from floating-gate MOSFETS (known as FGMOS).

Flash memory may be considered as a development of EEPROM technology. Data can be written to it and it can be erased, although only in blocks, but data can be read on an individual cell basis. To erase and re-program areas of the chip, programming voltages at levels that are available within electronic equipment are used. It is also non-volatile, and this makes it particularly useful. As a result Flash memory is widely used in many applications including memory cards for digital cameras, mobile phones, computer memory sticks and many other applications.

Flash memory stores data in an array of memory cells. The memory cells are made from floating-gate MOSFETS (known as FGMOS). These FG MOSFETs (or FGMOS in short) have the ability to store an electrical charge for extended periods of time (2 to 10 years) even without a connecting to a power supply.

This type of semiconductor memory is known as Phase change Random Access Memory, P-RAM or just Phase Change memory, PCM. It is based around a phenomenon where a form of chalcogenide glass changes is state or phase between an amorphous state (high resistance) and a polycrystalline state (low resistance). It is possible to detect the state of an individual cell and hence use this for data storage. Currently this type of memory has not been widely commercialized, but it is expected to be a competitor for flash memory.

Other forms of memory are seen around the home in the form of USB memory sticks, Compact Flash, CF cards or SD memory cards for cameras and other applications as well as solid state hard drives for computers. The semiconductor devices are available in a wide range of formats to meet the differing PCB assembly and other needs.