In the previous chapter, we have learnt about "Electric Charges and Fields". In this chapter, we shall focus on Electrostatic Potential and Capacitance. The energy point of view can be used in electricity and it is especially useful. Energy is also a tool in solving Problems more easily in many cases than by using forces and electric fields.

Electric energy can be stored in a common device called a capacitor, which is found in nearly all electronic circuits. A capacitor is used as a storehouse for energy. Capacitors store the energy in common photo flash units.

Note: As before, it is not the actual value of potential but the potential difference that is physically significant. If, as before, we choose the potential to be zero at infinity, the above equation implies.

▶Potential due to a Point Charge

Consider a point charge q placed at point O. Consider any point P in the field of the above charge. Let us calculate the potential at point P due to the charge q kept at a point O. Since the work done is independent of the path, we choose a convenient path, along the radial direction.

The electric force at P, due to q will be directed along OP , given by

If the work done by moving this positive charge to dr distance is dW then,

Hence, the total work done in bringing this charge from (∞) to 'r' will be,

This equation is true for any sign of charge q. For q < 0, V < 0, i.e., work done by the external force per unit positive test charge to bring it from infinity to the point is negative. Also, this equation is consistent with the choice that the potential at infinity be zero.

▶Potential due to an Electric Dipole

Consider dipole of length ‘2a’. Let P be a point at distance r1 from +q and r2 from -q. Let ‘r’ be the distance of P from the centre ‘O’ of the dipole. Let θ be an angle between dipole and line OP. 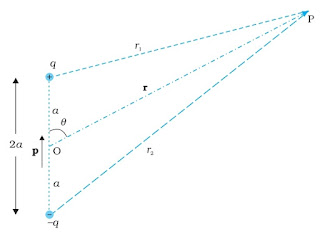 The potential due to +q,

The potential due to -q,

Case 2: If the point lies along the equatorial line of the dipole, then θ = 90°

An equipotential surface is a surface with a constant value of the potential at all points on the surface. For a single charge q, the potential is given by

This shows that V is a constant if r is constant. Thus, equipotential surfaces of a single point charge are concentric spherical surfaces centered at the charge.

As we know that

The above result can also be expressed in differential form as,

The negative sign in the expression signifies that as one moves in the direction of the electric field, potential decreases.

▶Potential Energy of a System of Charges

(i) Potential energy for a system of a two-point charge

The potential energy of a system of two charges is defined as the work done in assembling this system of charges at the given position from infinite separation.

Consider two charges q1 and q2 separated by distance r. Imagine q1 to be at A and q2 at infinity. The electric potential at B due to charge q1 is given by

(ii) Potential energy of a system of more than two charges

(iii) Potential energy of a dipole in an external field 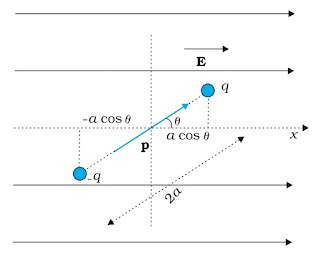 Consider a dipole of dipole moment ‘P’ suspended in a uniform electric field of intensity ‘E’. Let θ be the angle between P and E. Then we know torque τ = PE sinθ. Let the dipole be turned through an angle dθ then work done

Total work done in rotating the dipole from θ1 to θ2

This work done is stored as potential energy.

Important Points about Electrostatics of Conductors

(a) Inside a conductor, an electrostatic field is zero: In the previous chapter, we have already discussed that “when there is no electric current inside or on the surface of a conductor, the electric field inside the conductor is everywhere zero”.

(c) The interior of a conductor can have no excess charge in the static situation: In the previous chapter, we have already discussed it.

(d) Electrostatic Shielding: In an electrostatic situation, if a conductor contains a cavity and if no charge is present inside the cavity, then there can be no net charge anywhere on the surface of the cavity. This means that if you are inside a charged conducting box, you can safely touch any point on the inside walls of the box without being electrocuted. This is known as electrostatic shielding. 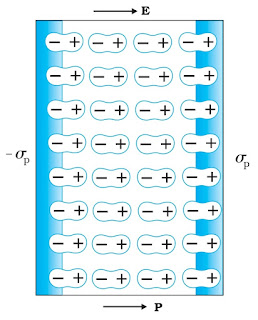 The behavior of a non–polar dielectric:- In an external electric field, the positive and negative charges of a nonpolar molecule are displaced in opposite directions. The displacement stops when the external force on the constituent charges of the molecule is balanced by the restoring force. The non-polar molecule thus develops an induced dipole moment. The dielectric is said to be polarized by the external field. 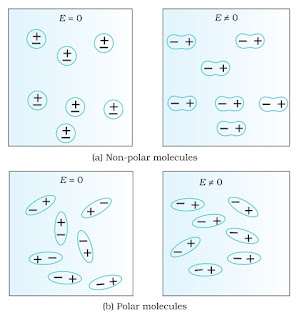 Definition of Capacitance:- Capacitance is defined as the amount of charge required to raise the potential of a conductor by one volt.

The capacity of an isolated spherical conductor

Consider a sphere with center O and radius r, which is supplied with a charge = +q. This charge is distributed uniformly over the outer surface of the sphere. Thus, the potential at every point on the surface is the same and is given by

The arrangement consists of two thin conducting plates, each of area A and separated by a small distance d. When charge q is given to the first plate, a charge –q is induced on the inner face of the other plate and positive on the outer face of the plate. As this face is connected to the earth, a net negative charge is left on this plate. Thus, the arrangement is equivalent to two thin sheets of charge. As d is much smaller than the linear dimension of the plates (d2 << A), we can use the result of the electric field by an infinite sheet of charge. The electric field between the plates is 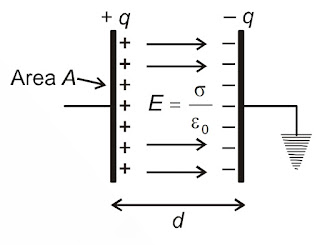 For uniform field potential difference between the plates.

▶Effect of Dielectric on Capacitance

The arrangements shown in the figure are examples of series grouping. When capacitors can be arranged in a row, so that there is no connection between two capacitors to any third capacitor, it is called a series combination. Or, when the same charge flows through each capacitor connected. 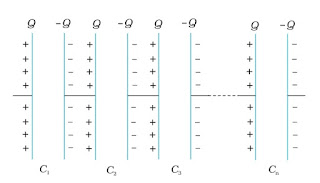 The arrangements shown in the figure are examples of parallel combinations. When two or more capacitors are connected between two given points, they are said to be in parallel. Or, when the capacitor bears the same potential difference across it.

▶Energy Stored in a Capacitor

Van de Graaff generator is a machine that can build up voltages in the order of a few million volts. The resultant electric fields are used to accelerate charged particles (protons, electrons, ions) to the high energies required for experiments to examine the small-scale structure of matter.

If you want more details on the Van de Graaff generator you may click here.