The study of static charges is called electrostatics and this complete electrostatic will be discussed in two chapters. In this chapter, we begin with a discussion of electric charge, some properties of charged bodies, and the fundamental electric force between two charged bodies.

▶What is Electric Charge?

Electric Charge is a fundamental property of a matter which is responsible for electric forces between the bodies. Two electrons placed at a small separation are found to repeal each other, this repulsive force (Electric force) is only because of the electric charge on electrons.

There are two types of charges that exist in our nature.

The important properties and characteristics of electric charge are given below.

(ii) Electric Induction:- When a charged object brings to contact with another uncharged, it gets the opposite charge of the charged object. It is called charging by induction.

(iii) Charge is Quantized:- An object that is electrically charged has an excess or deficiency of some whole number of electrons. Since electrons cannot be divided into fractions of electrons, it means that the charge of an object is a whole-number multiple of the charge of an electron. For example, it cannot have a charge equal to the charge of 0.5 or 1000.5 electrons.

(iv) Electric Charge is Conserved:- According to this property, "An electric charge neither can be created nor can be destroyed" i.e. total net charge of an isolated system is always conserved. Thus, when a glass rod is rubbed with silk cloth, both glass rod, and silk cloth acquire opposite charges in the same quantity. Thus, the total amount of charge remains the same before rubbing as well as after rubbing.

Most substances are either conductors or insulators. There is a third category called ‘semiconductors’ which are intermediate between conductors and insulators because they partially allow movement of charges through them.

Now as we know that two oppositely charged bodies attract each other. But it also has been our observation that a charged body attracts a neutral body as well. This is explained on the basis of charging by induction. In the induction process, two bodies (at least one body must be charged) are brought very close, but they never touch each other.

Let us examine how a charged body attracts an uncharged body. Imagine a conducting or partially conducting body (sphere here) is kept on an insulating stand and a charged rod (positive, for example) is brought very close to it. It will attract electrons to its side and the farther end of the sphere will become positively charged as it is deficient in electrons.

The constant k is often written in terms of another constant, ε0, called the permittivity of free space. It is related to k by

A charge produces something called an electric field in the space around it and this electric field exerts a force on any charge (except the source charge itself) placed in it. The electric field has its own existence and is present even if there is no additional charge to experience the force.

It has S.I. units of newtons per coulomb (N/C).

▶Electric Field due to a Point Charge 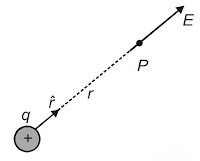 This force is directed away from the source charge q, since the electric field at P, the position of the test charge, is defined by

we find that at P, the electric field created by q is

A configuration of two charges of the same magnitude q, but of opposite sign, separated by a small distance (say 2a) is called an electric dipole.

The dipole moment for an electric dipole is a vector quantity directed from the negative charge to the positive charge and its magnitude is p = q × 2a (charge × separation). The SI unit of dipole moment is C-m (coulomb-metre).

▶(i) At Axial Position

The net electric field at P

For a short dipole, a is very small in comparison

▶(ii) At Broad side on Position Electric field vector due to +q is

Electric field vector due to –q is

Resultant field at P is,

For a short dipole

An electric dipole is placed in a uniform electric field E 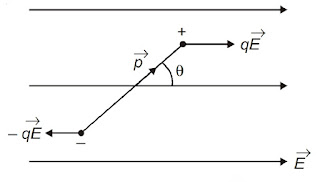 The force experienced by the dipole is

The two forces form a couple and it tries to turn the dipole. The torque due to the couple is given by

τ = either force × perpendicular distance between the forces

The number of electric field lines that are passing perpendicular through the unit surface of any plane is called electric flux. Consider an electric field that is uniform in both magnitude and direction, as in the figure. 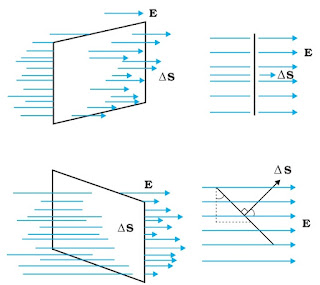 We can write this as N ∝ EA, which means that the number of field lines is proportional to the product of E and A. This is a measure of electric flux and is represented by the symbol φ. In the above case, φ = EA cosθ. The SI unit of electric flux is N-m2/C or V-m(volt-metre).

A solid angle is defined as an angle that is made at a point in place by an area. The SI unit of solid angle is steradian, and it is expressed as 'sr'.

It states that the electric flux Φ through any closed surface is equal to (1/εo) times the net charged q enclosed by the surface. That is 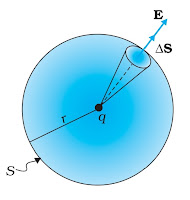 Proof: Consider a point charge q surrounded by a spherical surface of radius r centered on the charge. The magnitude of the electric field everywhere on the surface of the sphere is

Let us note some important points regarding this law:

(i). Electric field strength due to an infinitely long straight uniformly charged wire

Let a charged wire of infinite length be +q charge and its linear charge density λ be. To calculate the electric field due to this wire, let us assume a cylindrical Gaussian surface of radius r. Let the area of this Gaussian surface be dS1, dS2, dS3. 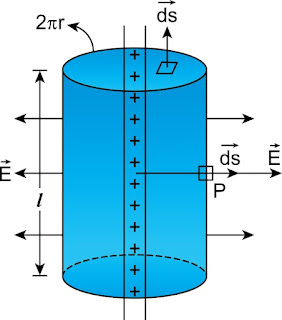 Hence, the total electric flux passing through the Gaussian surface,

Consider a charge +q in place at origin in a vacuum. We want to calculate the electric field due to this charge at a distance r from the charge. Imagine that the charge is surrounded by an imaginary sphere of radius r as shown in the figure below. This sphere is called the Gaussian sphere. 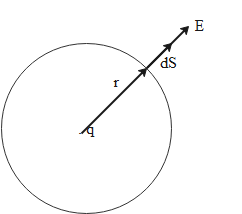 Consider a small area element dS on the Gaussian sphere. We can calculate the flux through this area element due to charge as follows:

Using this in Gauss theorem we get

This is the required Coulomb’s law obtained from the Gauss theorem.