1 Q:- What kind of charge are produced when a glass rod is rubbed with silk? Ans:- Glass rod acquires positive charge and silk acquires negative

Science is a complex and challenging subject, as it involves so many principles and concepts that are difficult to memorize. Those student who opt for science have to face many challenges and work hard to get good marks in the exam. In this lesson, students will learn about Electric Charges and Fields. The best solution of the problem is to practice as many Physics Class 12 Chapter 1 Important Questions as possible to clear the doubts. 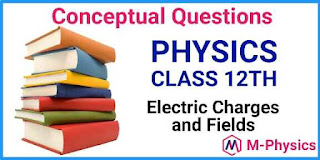 1 Q:- What kind of charge are produced when a glass rod is rubbed with silk?
Ans:- Glass rod acquires positive charge and silk acquires negative charge.

6 Q:- Give one example to demonstrate that electrostatic force are much stronger than gravitational force.
Ans:- A charged comb can lift a small piece of paper against the gravitational pull of the Earth on the paper.

16 Q:- What is the basic fact involved in superposition principle involved in electrostatics?
Ans:- The force between two given charges remains unaffected by the presence of the other charges.

30 Q:- If Coulomb's law involved r1/3 dependence would Gauss' law will still hold good?
Ans:- No, in that case, Gauss' law will not hold good. In fact, in such an eventually, electric flux of a closed surface, besides charge enclosed, would also depend on the dimensions of Gaussian surface. Hence, Gauss' law cannot be applied to a surface.

34 Q:- Is there some method of charging a conductor without rubbing it with another object and without bringing it into contact with a charged body?
Ans:- Yes, the conductor can be charged by method of induction by bringing a charged object near the conductor.

36 Q:- Can two balls having same kind of charge on them attract each other? Explain.
Ans:- Yes, two balls having same kind of charge can attract each other, if one ball possesses charge quite large as compared to that on the other ball. The reason is that when two charged balls are placed near each other, they induce opposite kinds of charges on the faces of each other. Since on the ball having a small amount of charge, quite a large amount of induced charge is produced, two balls get attracted towards each other due to the force between the large inducting charge of one ball and the large induced charge (opposite in nature) on the other ball.