Objective Physics, Fundamental Forces in Nature, Role of Mathematics in Physics, Scope and Excitement of Physics, Conservation Laws in Physics 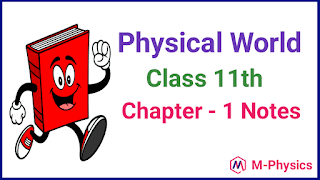 Humans have always been curious about the world around them. The night sky with its bright celestial objects has fascinated humans since time immemorial. The regular repetitions of the day and night, the annual cycle of seasons, the eclipses, the tides, the volcanoes, the rainbow have always been a source of wonder.

The word Science originates from the Latin verb Scientia meaning ‘to know’. The Sanskrit word Vigyan and the Arabic word ilm convey similar meaning, namely ‘knowledge’. Science is a systematic attempt to understand natural phenomena in as much detail and depth as possible, and use the knowledge so gained to predict, modify and control phenomena. Science is exploring, experimenting and predicting from what we see around us.

▶Role of Mathematics in Physics

Scope and Expansion of Physics

Various branches of physics are mainly divided into two parts- (A) Classical Physics and (B) Modern Physics.

(i). Mechanics:- Under this subject the systematic motion of objects is studied. One of its branches is Fluid Mechanics, in which the dynamic behavior of liquids is studied.

(ii). Thermodynamics:- Under this subject the motion in a system made of heat, heat and fine particles is studied.

(v). Optics:- Under this subject the nature and transmission of light is studied. To understand the Images, refraction, reflection, interference, diffraction and polarization formed through lenses and mirrors, it is necessary to have knowledge of this subject.

(i). Relativity:- Under this subject the motion of those bodies is studied which move with a velocity equal to the speed of light. In fact it is a theory of relativism in nature.

(ii). Quantum Mechanics:- Under this subject the principles of modern physics, the dual nature of light and matter are studied. It acts as a bridge between classical physics and modern physics.

(iii). Atomic Physics:- Under this subject, atomic structure and properties of atoms are studied.

(iv). Nuclear Physics:- Under this subject, the nucleus of an atom and its properties are studied, apart from this some other subjects are as follows-

Contribution of Physics in Technology and Society

(i). Importance of Physics in Chemistry:- The study of the chemical composition of matter, types of bonds, etc. has become possible on the basis of intermolecular forces found between molecules. On the basis of the diffraction of X-rays, the structure of the atom, the radioactivity, the detailed study of the structures of many solids has become possible.

(ii). Importance of Physics in Biology:- Many biological specimens are studied with the help of light microscope. The study of many physical structures became possible with the creation of the electron microscope.

(iii). Importance of Physics in Astronomy:- With the help of optical telescope, the study of motion of various planets and celestial bodies has become possible.

▶Purpose and Excitement of Physics

You can now see that the scope of physics is truly vast. It covers a tremendous range of magnitude of physical quantities like length, mass, time, energy, etc. At one end, it studies phenomena at the very small scale of length (10-14 m or even less) involving electrons, protons, etc.; at the other end, it deals with astronomical phenomena at the scale of galaxies or even the entire universe whose extent is of the order of 1026 m.

Mainly, four types of force are exist in our nature that are described bellow:

It is the force of mutual attraction between any two objects due to their masses. All bodies on the Earth experience this force due to the Earth. Gravity governs the motion of moons around the Earth, motion of planets around the sun. It plays a main role in formation and evolution of stars, galaxies and galactic clusters. Newton's law of gravitation gives the magnitude of force exerted by a particle of point mass m1 on another particle of point mass m2 at a distance r from it as

where G is universal gravitational constant G = 6.67 × 10–11 Nm2/kg2. This force acts along the line joining the two particles.

It is the force between charged particles. It includes electric and magnetic forces. If two static point charges q1 and q2 are kept at a distance r, then the electrostatic force between them is given as

This is known as the Coulomb force.

It is the force that binds nucleons (protons and neutrons) in a nucleus. The nucleus contains positively charged protons and electrically neutral neutrons. The repulsive electrostatic force between protons should make a nucleus unstable. There should be a strong attractive force that counteracts the repulsive force to keep a nucleus stable.

We know that gravitational force is negligible as compared to electrostatic force. So, we have a new basic force, i.e., strong nuclear force, which is the strongest of all fundamental forces, about 100 times the electromagnetic force. It is the same between a proton and a neutron, a proton and a proton, a neutron and a neutron. It is an extremely short-ranged force (≈ 10–15 m). It keeps the nucleus stable. It does not depend upon charge. An electron does not experience this force.

It appears in some nuclear processes like β-decay of the nucleus, in which the nucleus emits an electron and an uncharged particle called the neutrino. It is also responsible for the decay of many unstable particles (muons into electrons, pions into muons, and so on). It is not as weak as the gravitational force, but much weaker than the strong nuclear and electromagnetic force. They are exceedingly short-ranged forces, of the order of 10–16 m.

A remarkable fact about any physical phenomenon is the invariance of some special physical quantities. They are the conserved quantities of nature, i.e., energy, mass, charge, linear momentum, and angular momentum. In classical physics, we have the following conservation laws:

▶(i) Law of Conservation of Energy

According to this law, the sum of energy of all kinds in this universe or of an ideal isolated system remains constant. Energy can neither be created nor be destroyed. It can only be transformed from one form to the other.

According to this law, the linear momentum of a system remains unchanged in the absence of an external force. It is denoted by P and expression is given by P = mv.

A rotating body has inertia, so it also possesses momentum associated with its rotation. This momentum is called 'angular momentum'.

According to this law, the angular momentum of the system remains constant if the total external torque acting on it is zero. e.g., Planets revolving around the sun in an elliptical orbit with constant angular momentum.

▶(iv) Law of Conservation of Charge

According to this law, charges (in the form of electrons) are neither created nor destroyed but are simply transferred from one body to another.