In all these cases, there must be some force acting on the moon, the planets and the falling bodies. In the previous chapter, we have learnt about "Work, Energy and Power". The force acting on them is called Gravitational force. In this chapter we shall learn about the basic laws governing gravitation and the motion of objects under the influence of gravitation.

In astronomy, Kepler's laws of planetary motion, proposed by Johannes Kepler during the period of 1609 to 1619, describe the orbits of planets around the Sun. The motion of planets has been a subject of much interest for astronomers from very early times.

(i) Kepler's First Law (The Law of Orbits)

It states that "All planets move around the sun in elliptical orbits with sun at one of the focus not at centre of orbit." 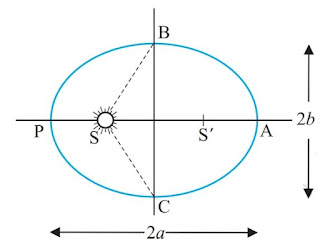 Kepler's second law states that "The line joining the sun and planet sweeps out equal areas in equal time or the rate of sweeping area by the position vector of the planet with respect to sun remains constant." 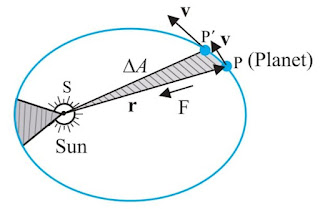 The area swept out by radius SP in time Δt.

Area swept by radius vector per second or Areal velocity,

It follows that the are velocity of the radius vector of planet relative to sun remains constant. This is Kepler's Second Law.

It states that "The time period of revolution of a planet in its orbit around the sun is directly proportional to the cube of semi-major axis of the elliptical path around the sun."

Let T be period of revolution of the planet in elliptical orbit, area of ellipse = πab a and b being semi-major and semi-minor axes of the ellipse.

If l is the semi-latus rectum of ellipse, then

Since all other quantities are constant. This is Kepler's third law. 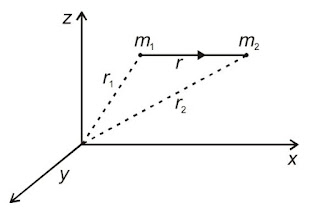 where G is the universal gravitational constant.

Acceleration Due to Gravity of the Earth

(i) Above the surface of the Earth

Let us consider a point mass m at a height h above the surface of the earth. 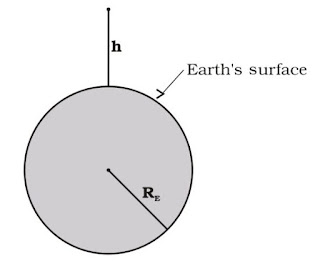 Now, as we know that the mass of earth is concentrated at its centre. The magnitude of force on the point mass m will be

The acceleration experienced by that point mass will be

From the above equation it is clear that as we move above the surface of earth the value of g reduces.

(ii) Below the surface of the Earth

Let us consider a point mass m at A which is present at depth d below the surface of the earth. Consider the radius of earth as Re and a mass of Me. 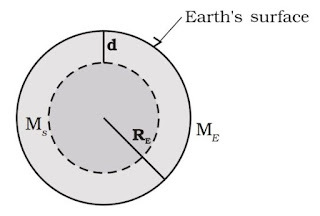 As per our discussion, we know that the gravitational force on point mass m will be due to the smaller sphere of radius (Re–d) whose mass Ms (say) is concentrated at the centre.

By universal law of gravitation

As we know from Newton’s second law that

Thus, as we go down below the earth’s surface, the acceleration due to gravity decreases.

Satellite is a body which revolves continuously in an orbit around a comparatively much larger body. Earth satellites are those objects which revolve around the earth. The motion of satellites is very similar to the motion of planets around the sun and hence Kepler’s laws of planetary motion are most likely applicable to them. Moon is the only natural satellite of the earth with nearly a circular orbit with the time period of approximately 27.3 days which is also roughly equal to the rotational period of the moon about its own axis.

Suppose a satellite on equatorial plane of the earth is revolving with a time period of 24 hours then it would appear stationary from a point on earth. Hence, the satellite which appears at a fixed position and at a definite height to an observer on earth, is called a geostationary satellite. 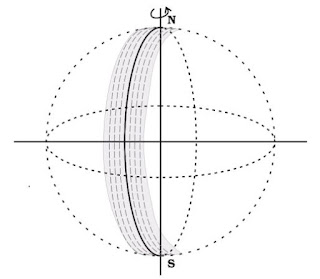 Weight of an object is the force with which the earth attracts it. We are conscious of our own weight when we stand on a surface, since the surface exerts a force opposite to our weight to keep us at rest.

"When an object is in free fall, it is weightless and this phenomenon is usually called the weightlessness." In a manned satellite, people inside experience no gravity. This is a example of weightlessness.