In astronomy, Kepler's laws of planetary motion, proposed by Johannes Kepler during the period of 1609 to 1619, describe the orbits of planets around the Sun. The motion of planets has been a subject of much interest for astronomers from very early times.

In the above figure, the orbits are ellipses, with focal points F1 and F2 for the first planet and F1 and F3 for the second planet. The Sun is placed in focal point F1.

(i) The Law of Elliptical Orbits (First Law)

According to this law, "Every planet moves in an elliptical orbit around the sun, the sun being at one of the foci." 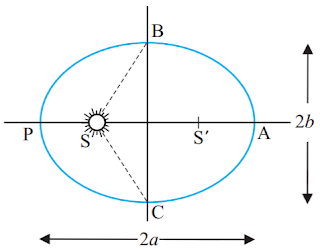 Let S be the sun (mass M) and a planet of mass m, revolving around the sun in elliptical orbit. The force acting between planet and sun is gravitational and given by

r being position vector of planet relative to sun

As torque acting on planet is zero, the angular momentum of the planet relative to sun is conserved.

The angular momentum of planet relative to sun is

It follows that J, being constant, must be perpendicular to the plane containing position vector r and velocity v that is the orbit of the plane must lie in a plane.

According to this law, "The radius vector, drawn from the sun to a planet, sweeps out equal areas in equal times i.e., the areal velocity of the radius vector is constant." 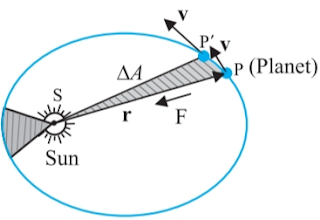 The area swept out by radius SP in time Δt.

Area swept by radius vector per second or Areal velocity,

It follows that the are velocity of the radius vector of planet relative to sun remains constant. This is Kepler's Second Law.

This Law states that, "The square of the period of revolution of the planet around the sun is proportional to the cube of the semi-major axis of the ellipse."

It is clear from the above equation that shorter the orbit of the planet around the sun, shorter the time taken to complete one revolution.

Let T be period of revolution of the planet in elliptical orbit, area of ellipse = πab a and b being semi-major and semi-minor axes of the ellipse.

If l is the semi-latus rectum of ellipse, then

Since all other quantities are constant. This is Kepler's third law.