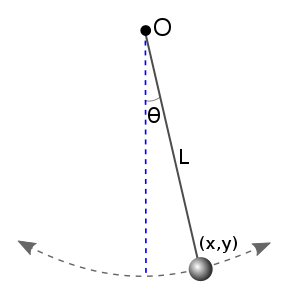 Constraints are of following types:

If a particle is free to move on the circumference of the circle then only one coordinate needed (i.e. θ) to describe the motion of particle because the radius of the circle remains same

If a particle is free to move on the spherical circumference then among r, θ and Φ only θ and Φ are sufficient because

then they are called holonomic constraint.

If the constraints is not expressible in the form of equation (2) then it is called non-holonomic constraints, e.g. the motion of a particle placed on the surface of radius

The particle will first slide and then fall freely on earth at that time the distance of particles from the surface will increase, e.g., a gas molecule in a spherical container, motion is described as :

If we throw a particle vertically upward with v velocity then it will move in straight line. The co-ordinate may be defined at a time t.

Constraints are always related to a force that restrict the motion of the particle. These forces associated with the constraints are called as forces of constants.