First Law:- According to this law, "A body continuous in its state of rest or constant velocity unless it is disturbed by external influence".

Sir Isaac Newton expressed his ideas regarding the motion of a bodies in the form of three laws which are considered as the basic laws of mechanics. In fact mechanics is a study of certain general relations that describe the interactions of material bodies. One general property of a material body is inertial mass and other is force to describe the movement of bodies. 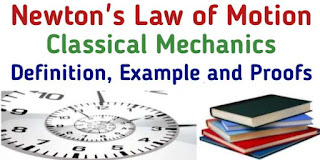 There are three laws of motion of Newton which are explained below in detail :

(i) Law of inertia (First Law)

According to this law, "A body continuous in its state of rest or constant velocity unless it is disturbed by external influence". This property of body to being continue in its original state of motions and not changing the state is called Inertia and the external influence is called force.

According to this law, "The rate of change of momentum of a body is directly proportional to the applied force on the body", i.e.,

The momentum of a body is defined as,

In fact, 1st law is a special case of 2nd law, because If force is not acting on a body, i.e. the force is absent for a body, f = 0, then dv/dt = 0 and therefore v = constant, so body continues in its original motion.

Examples of second Law of motion

According to this law, "To every action there is always equal and opposite reaction".

Let two bodies 1 & 2 are interaction together, then

If the ratio of accelerations of two interacting bodies is determined then their mass ratio will be determined. If one is standard (1kg) then mass of the other body can be calculated,

This means that if an isolated system of two bodies is interacting among the stylemselves, then by measuring their accelerations the ratio of their masses can be determined.

Examples of Third Law of Motion