Magnetic phenomena are universal in nature. The science of magnetism grew from the observation that a certain ore could attract small pieces of iron and point in a certain direction when kept on the floating cork. The ore was originally found in the district of Magnesia in Asia Minor (now in western Turkey) and therefore named magnetite.

In this chapter, we shall study about magnetic properties and behaviour of matter.

When iron filings are sprinkled on a sheet of glass placed over a short bar magnet, a particular pattern is formed and the following conclusions are drawn 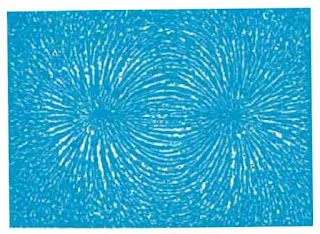 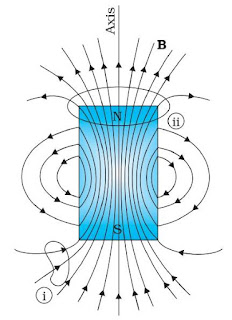 Let pole strength of a monopole be qm, then the magnetic force between two isolated poles kept at separation r is

This force will be attractive if one pole is North and the other is South and the force will be repulsive if both poles are of the same type (i.e. North-North or South-South).

(iii) Magnetic Field due to a Monopole

Magnetic field due to monopole at a point is equal to the magnetic force experienced by a unit pole strength if kept at that point.

(A) On axial position

Magnetic field due to N-pole at P.

Magnetic field due to S-pole at point P.

It is along magnetic dipole moment.

(B) On normal bisector

Magnetic field due to N-pole.

Magnetic field due to S-pole.

From symmetry net field at P will be

Torque on a Magnetic Dipole in Uniform Magnetic Field 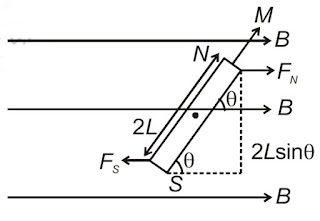 We know torque of electric dipole in electric field E

replacing E by B and P by M, we get torque on magnetic dipole

Let at an instant dipole is at θ from the magnetic field, then the torque acting on the dipole is

In order to rotate the dipole against this torque by dθ angle, work is done on it by some external source. 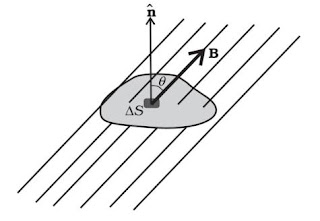 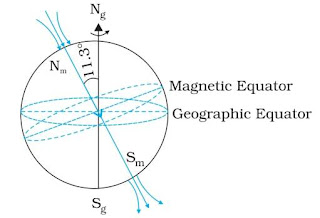 It is the angle between the true geographic north-south direction and the north-south line shown by a compass needle at a place. Its value is more at higher latitudes and smaller near the equator. The declination in India is small.

It is the angle between the axis of the needle, (in magnetic meridian) that is free to move about a horizontal axis and horizontal. Thus dip is an angle that the total magnetic field of earth Be makes with the surface of the earth. The angle of dip is maximum δ = 90º at poles. It is zero at the magnetic equator.

The component of earth’s magnetic field along vertical is called vertical component Bv.

Relation Between Horizontal and Vertical Component

Where `\vec{M}_{Net}=`Net induced dipole moment in the material. The unit of intensity of magnetisation `\vec{I}` is A/m.

In order to magnetize a magnetic material, it is kept in an external field B0. The ratio of magnetising field to the permeability of free space is called magnetic intensity H.

The unit of magnetic intensity is the same as that of the intensity of magnetisation i.e. A/m.

It is defined as the “ratio of the magnitude of the intensity of magnetisation |`\vec{I}`| to that of magnetic intensity |`\vec{H}`|”. It is a scalar quantity with no dimension, no unit. The physical significance of magnetic susceptibility is that it is the degree of ease with which a magnetic material can be magnetised. A material with a higher value Xm can easily be magnetised.

Curie and Faraday observed that almost all substances have certain magnetic properties. On the basis of the magnetic behaviour of different materials, they divided them into three categories : (i) Diamagnetism; (ii) Paramagnetism; (iii) Ferromagnetism.

The substances which have a tendency to move from stronger to weaker part of the external magnetic field is called Diamagnetic substance and this phenomenon is known as Diamagnetism. They develop this tendency because they are feebly magnetized in a direction opposite to that of the external magnetizing field. Ex- bismuth, copper, lead, silicon, nitrogen, water and sodium chloride.

The substances which get feebly magnetized in the direction of the applied external magnetic field is called paramagnetic substance and this phenomenon is known as Paramagnetism. Therefore they have a tendency to move from the region of the weak magnetic field to a strong magnetic field i.e. they get weakly attracted to a magnet. Ex- Aluminium, sodium, calcium, oxygen and copper chloride.

The magnetic susceptibility of a paramagnetic substance is inversely proportional to absolute temperature T. 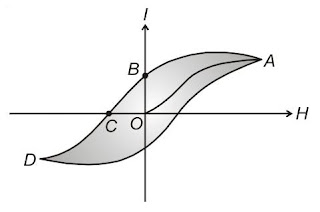 The substances which at room temperature retain their magnetisation for a long period of time are called Permanent magnets. Permanent magnets should have (a) high retentivity and (b) high coercivity. As the material, in this case, is never put to cyclic changes of magnetization, hence hysteresis is immaterial. From the viewpoint of these facts, steel is more suitable for the construction of permanent magnets than soft iron. The fact that the retentivity of iron is little greater than that of steel is outweighed by the much smaller value of its coercivity.

An electromagnet is a temporary strong magnet and is just a solenoid with its winding on a soft iron core which has high permeability and low retentivity.