Science is a complex and challenging subject, as it involves so many principles and concepts that are difficult to memorize. Those student who opt for science have to face many challenges and work hard to get good marks in the exam. In this lesson, students will learn about Magnetism and Matter. The best solution of the problem is to practice as many Physics Class 12 Chapter 5 Important Questions as possible to clear the doubts. 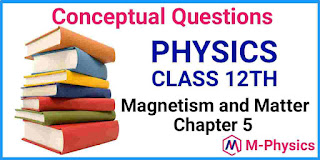 2 Q:- What happens if a bar magnet is cut into two pieces:

Ans:- In either case, one gets two magnets and each magnet has a North as well as South Pole. Of course, the magnetic moment of each piece is less than that of the original bar magnet.

4 Q:- State Gauss' Theorem in magnetism. What does it signify?
Ans:- According to Gauss's theorem for magnetism, the net magnetic flux through any closed surface is zero.

Gauss's theorem in magnetism signifies the fact that no isolated magnetic monopoles exist in nature and the the simplest magnetic element is a magnetic dipole or a current loop behaving as a dipole. Thus, there are no sources or sinks of magnetic field B inside a closed surface and next flux is zero.

10 Q:- In which direction, should a compass needle align if taken to (a) North, and (b) South Pole of the Earth?
Ans:- At either Pole, the value of angle of dip is 90 degree and a freely suspended needle must remain Vertical in equilibrium state. A compass needle cannot align itself vertically because it is pivoted about an vertical Axis. Consequently, at the poles, a compass needle has no preferred directions and many comes to rest along any direction.

Steel, Cobalt and certain alloys like Alnico or the Ticonal are used for designing permanent magnets.

19 Q:- Why do magnetic field lines prefer to pass through ions than through air?
Ans:- Iron is ferromagnetic materials having a very high value of relative permeability (`μ_r`) and a magnetic susceptibility (`\chi`). Consequently, magnetic field lines banned by a large extent toward the iron sample.

29 Q:- An iron magnet is heated to 1500 K and then cooled in space devoid of any magnetic field. Will it retain its magnetism? Give reason.
Ans:- Curie's temperatures for iron is 1043 K. If an iron magnet is heated at 1500 K, it will lose its ferromagnetic character. If the sample is cooled again in the regions where there is no external magnet field, it will not be magnetized again. Hence, the iron magnet will now become a simple piece of iron without any magnetism of its own.

30 Q:- What do you mean by retentivity and coercivity of a magnetic materials? What are their units?
Ans:- Retentivity of given magnetic specimen is a measure of magnetic field are retained by the specimen when external magnetizing intensity is removed. The SI unit of retentivity is tesla (T).

Coercivity of a magnetic specimen is a measure of magnetic intensity required in opposite direction so as to destroy the magnetic field retained by the specimen. The SI unit of coercivity is ampere per meter (A/m).

Magnetic field lines can be confined within the core of a toroid because it has ends.

35 Q:- Magnetic field arises due to charges in motion. Can a systems have magnetic moments even though its net charges 0.
Ans:- Yes, it is possible that although net charge on a system may be zero but net magnetic dipole moment due to various current loops may not be zero. A para and ferromagnetic material is an example of such a situation. The net charge on an atom of a paramagnetic material is zero but net magnetic dipole moment of an atom is finite.

36 Q:- An unmagnetized piece of iron is a attracted towards a bar magnet. What is the real origin of the attractive force experienced by the iron piece?
Ans:- Iron is a ferromagnetic material and each atom of it has a finite magnetic dipole moment. These atomic dipoles form domains. In one domain, all the atomic dipole moments are aligned in the same directions but different domains are oriented randomly so it has no magnetization.

When a bar magnet is brought near the iron piece, the domains in iron tend to align themselves along the directions of a field of the bar magnet. As a result, the iron piece acquires some magnetization and is accordingly attracted towards the magnet.

Property of diamagnetism is, however, independent of the temperature.

41 Q:- How will you identify whether the magnetic field at a point is due to the earth or due to the some current carrying conductor?
Ans:- We take a small size magnetic compass needle and move it in a small region. If it always points in same direction, the field present is due to the earth's magnetism only. However, if the compass needle points in the some other directions and directions gradually changes on changing the positions of needle then the magnetic field may be due to some current carrying conductor.