In the previous chapter, we have learnt about "Motion in a Straight Line". In this chapter, we shall focus Motion In a Plane. In order to describe motion of an object in two dimensions (a plane) or three dimensions (space), we need to use vectors to describe the physical quantities. Therefore, it is first necessary to learn the language of vectors. What is a vector? How to add, subtract and multiply vectors ?

In physics, we can classify quantities as scalars or vectors. Basically, the difference is that a direction is associated with a vector but not with a scalar.

A scalar quantity is a quantity with magnitude only. It is specified completely by a single number, along with the proper unit. Scalars can be added, subtracted, multiplied and divided just as the ordinary numbers. Examples : current, speed, pressure etc.

A vector quantity is a quantity that has both a magnitude and a direction and obeys the triangle law of addition or equivalently the parallelogram law of addition. Examples : displacement, velocity, acceleration, momentum etc.

Following are the characteristics of vectors:

How to Represent a Vector?

The Dot and Cross Product of Two Vectors

(i). The Dot Product of Two Vectors

Where A & B are magnitudes of vectors `\vec{A}` and `\vec{B}` respectively and θ is the smaller angle between them. Cross product is called vector product as A, B and sinθ are scalars. Both vectors have a direction and their vector product has a same direction. 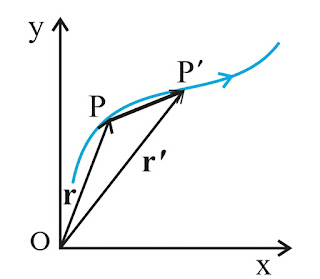 Two vectors having same direction and equal magnitude are said to be equal vectors. This is the necessary and sufficient condition for any two vectors to be equal.If two vectors P and Q are equal, we can write P=Q 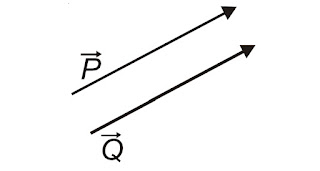 A vector having its magnitude equal to one is known as unit vector. In order to denote a unit vector we use cap (＾) sign above the symbol of the vector. Unit vector has no unit.

There are predefined unit vectors along x, y and z-axis which are `\hat{i}`, `\hat{j}` and `\hat{k}` respectively. Unit vectors are used to represent the direction. 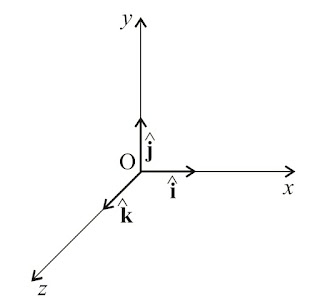 A vector with zero magnitude and an arbitrary direction is called a zero vector. It is presented by `\vec{0}` and also known as Null vector.

(iv). Negative of a Vector

The vector whose magnitude is same as that of A but the direction is opposite to that of vector A is called a negative of A and is represented by -A.

A and B are said to be parallel vectors if they have same direction,and may or may not have equal magnitude (A॥B). If the directions are opposite, then A is anti-parallel to B.

Multiplication of Vectors by Real Numbers

Vectors cannot be added by simple addition of numbers as this combined effect is direction dependent. You will have to use the following method.

(i). Triangular Law of Vector Addition 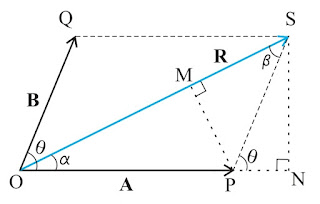 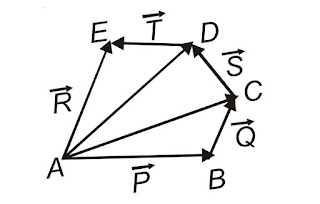 In the form of unit vector,`\vec{A}` can be written as 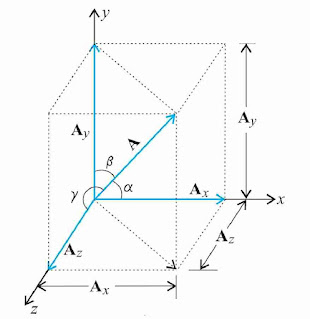 where cosα, cosβ and cosγ are the direction cosines of vector A with positive x, y and z axes respectively.

When a particle is thrown obliquely near the surface of earth it moves along a curved path (known as parabolic path). Such a particle is called a projectile and its motion is called projectile motion. Projective motion is an example of plane motion. Ex : motion of a football, a cricket ball, a baseball etc.

(i). Equation of Trajectory

The above equation is called the equation of trajectory. As the equation represents a parabola. Thus, the trajectory (or the path) of a projectile is a parabola. Here, u, θ, x and y are four variables. If any three quantities, as mentioned, are known then the fourth quantity can be solved directly.

The time taken by a projectile to return its initial elevation after projection is known as time of flight. It is denoted by (T) and given by

The maximum horizontal distance between the points of projection and the point of horizontal plane where the projectile hits is called horizontal range. It is denoted by R and give by

Note : The range of projectile will be maximum if θ = 45

When an object follows a circular path at a constant speed, the motion of the object is called uniform circular motion.

the acceleration of an object moving with speed v in a circle of radius R has a magnitude v2 /R and is always directed towards the centre. This is why this acceleration is called centripetal acceleration.

The angular velocity of particle at any instant is defined as the rate of change of angular position θ. That is,

The angular acceleration α at an instant is defined as the rate of change of angular velocity (ω) w.r.t. time. That is,