When we look around us, we find the planets moving around the sun in orderly manner, movement of machinery parts in a factory, phases of the moon - all of them are following certain laws. They all are acted upon by certain forces.

In the preceding two chapters, we described motion in terms of displacement, velocity and acceleration, i.e., we used kinematic quantities for describing motion without considering what might cause that motion. In order to understand this beauty, let us take a step forward by understanding "Force and laws of motion". 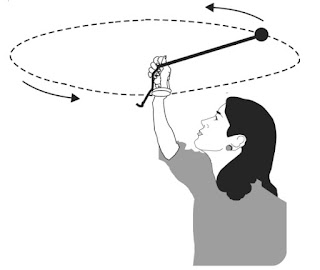 According to this law, "A body continuous in its state of rest or constant velocity unless it is disturbed by external influence". In simple words, if no unbalanced external force acts on a body at rest, it will remain at rest and if it is moving with uniform motion, it will continue to do so. Or, if the resultant force on a body is zero, it remains unaccelerated.

Inertia and its Types

There are three types of inertia:

It is inability of a body by virtue of which it cannot move by itself. A body at rest remains at rest and cannot start moving on its own due to inertia of rest.

The passengers in a bus fall backward when it starts suddenly. This is because the sudden start of the bus brings motion to the bus as well as to our feet in contact with the floor of the bus. But the rest of our body opposes this motion because of inertia so they fall backwards.

It is inability of a body in motion to stop by itself. A body in uniform motion can neither get accelerated nor get retarded on its own. It also cannot come to rest on its own.

A man jumping from moving bus falls forward due to inertia of motion. As his feet touch the ground lower part of the body comes to rest, while the remaining parts of the body keep on moving. As a result he falls down in the direction of motion of the bus.

It is inability of a body by virtue of which it cannot change its direction of motion by itself.

When a car makes a sharp turn at a high speed, the driver tends to get thrown to other side due to directional inertia. When the car is moving in the straight line, the driver tends to continue in straight line motion. When the unbalanced force is applied by the engine to change the direction of motion of car. The driver slips to one side of the seat due to the inertia of his body.

It is defined as the quantity of motion contained in a body. It is measured as the product of mass of the body and its velocity and has the same direction as that of the velocity. It is a vector quantity. It is represented by p. The SI unit of momentum is kg-m/s.

When we look around us and observe state of rest or motion of bodies, we find that nothing moves on its own. When we push or pull a body

Force is an entity which when applied on a body changes or tends to change a body’s, State of rest, State of uniform motion, Direction of motion, Shape.

(i). Balance Force : When a number of forces acting simultaneously on a body do not bring about any change in its state of rest or of uniform motion along a straight line, then the forces acting on the body are said to be balanced forces. Balanced forces do not produce any acceleration.

(iii). Resultant Force : When two or more forces act on a body simultaneously, then the single force which produces the same effect as produced by all the forces acting together is known as the resultant force.

This law states that "The rate of change of momentum of a body is directly proportional to the applied force and it takes place in the direction in which the force acts.”

Consider a body of mass m moving with some initial velocity v. If an unbalanced force F is applied, the velocity will change from v to v + Δv. The change in momentum will be Δp = mΔv which changes from p (initial momentum) to p + Δp (final momentum).

According to the second law,

The momentum of a body is defined as,

The product of force and time, which is the change in momentum of the body remains a measurable quantity. This product is called impulse.

According to this law, "To every action there is always equal and opposite reaction".

Let two bodies 1 & 2 are interaction together, then

If masses of both bodies be m1 & m2 then

It is a simple wooden or metallic machine that uses a wheel and rope to lift heavy loads. Let a be the common acceleration of the system of two bodies, which is given by 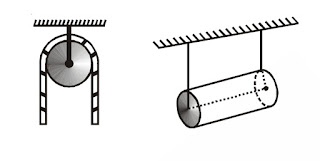 When the block of the pulley is fixed on a high platform, it is known as fixed. An extensible string passes over the groove where its one end is attached to the body to be lifted while the other end is free.

When the block of the pulley is not fixed but carries the load, it is known as Movable. An inextensible string is tied around the groove where its one end is fixed to fixed support while the other end is kept free to apply the effort.

Consider two objects A and B of masses m1 and m2 moving along the same direction at different velocities u1 and u2 respectively.

Applications of Law of Conservation of Linear Momentum

In mechanics, we come across a variety of forces, like the weight of a body or the force exerted by a stretched spring.

Weight is the gravitational force with which the earth pulls an object. The weight of an object is (F=mg), where g is acceleration due to gravity. The weight of a body is a force acting on the body towards the centre of earth.

It is the pulling force exerted by a string, along the length of the string on the objects connected to the string. If string is massless then magnitude of tension is same throughout the string.

A spring is generally a helical metallic wire. When the two free ends of the spring are pulled away or pushed towards each other, the length of the spring is changed. The spring has a tendency to come back to its original length or it develops an opposition to change in its length. This opposing force (F) is the restoring force. 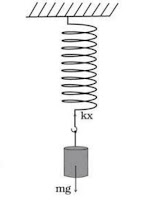 The opposing force is directly proportional to the change in length. It is given by F = kx, where k is a constant for a given spring.

It is a general observation that when you try to slide a heavy box across the floor, the box does not move at all unless you push it with a certain minimum force. This means that there exists a certain opposition to the motion of box on the ground. This opposing force acts between the surface of box and ground and is called force of friction.

The magnitude of the kinetic friction force fk is found experimentally to be approximately proportional to the magnitude N of the normal force. In such cases, we represent the relationship by the equation

where μk is a constant called the coefficient of kinetic friction.

The frictional forces between two surfaces in contact before a relative motion has started, are referred to as static friction. Static friction is always a little more than dynamic friction.

The magnitude of static frictional force is also proportional to normal force.

It is the maximum angle of inclination (θ) of a rough inclined plane with horizontal such that the block kept on it remains at rest. 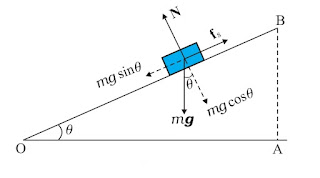 At angle of repose,

Angle of friction = Angle of repose

When a spherical body or a circular ring rolls over a horizontal plane without slipping then applied friction by the surface on body is called rolling friction. Rolling friction is much smaller than static or sliding friction. That is why, discovery of the wheel was a major milestone in the history.

Following are the different methods that are used for reducing the friction:

A Pseudo force (also called a fictitious force, inertial force or d’Alembert force) is an apparent force that acts on all masses whose motion is described using a non-inertial frame of reference frame, such as rotating reference frame.