In the present chapter, we shall study the phenomena like reflection, refraction, and dispersion of light. We then go on to describe the construction and working of some important optical instruments, including the human eye.

We can see objects because of the light reflected or emitted by them. Nature has given us eyes, which can detect a small region of the electromagnetic radiation spectrum. This region (visible to us) is called light. From common experience, we can say that light travels with a great speed and that it travels in a straight line.

The phenomenon in which a light ray is sent back into the same medium from which it is coming, on interaction with a boundary, is called reflection. The boundary can be a rigid surface or just an interface between two media. 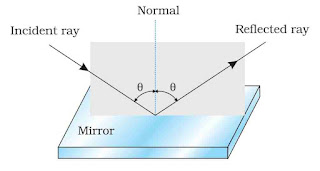 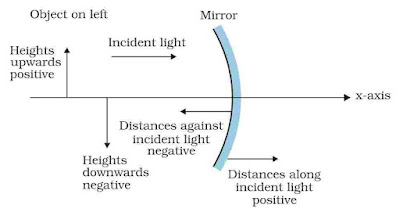 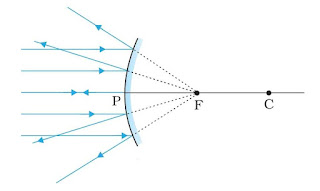 Consider two plane mirrors inclined at an angle θ (in degrees) with each other. Multiple reflections take place from the surfaces of these mirrors and more than one image is formed. To find out a number of images, we compute `n=[\frac{360°}{\theta}]`. Now, if

When light travels from one transparent medium to another, it deviates from its original path. The phenomenon of change in the path of light at the medium of separation as it goes from one medium to another medium is called refraction.

`\mu_{21}` is called the refractive index of the second medium w.r.t. first medium.

When light travels from an optically denser medium to a rarer medium at the interface, it is partly reflected back into the same medium and partly refracted to the second medium. This reflection is called internal reflection. 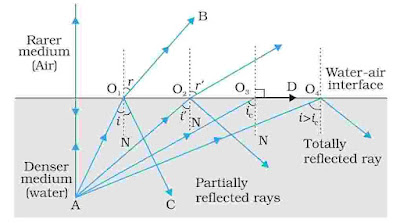 On hot summer days, the air near the ground becomes hotter than the air at higher levels. The refractive index of air increases with its density. Hotter air is less dense and has a smaller refractive index than cooler air. If the air currents are small, that is, the air is still, and the optical density at different layers of air increases with height. 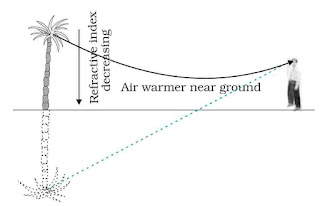 As a result, light from a tall object such as a tree passes through a medium whose refractive index decreases towards the ground. Thus, a ray of light from such an object successively bends away from the normal and undergoes total internal reflection, if the angle of incidence for the air near the ground exceeds the critical angle. To a distant observer, the light appears to be coming from somewhere below the ground.

The observer naturally assumes that light is being reflected from the ground, say, by a pool of water near the tall object. Such inverted images of distant tall objects cause an optical illusion to the observer. This phenomenon is called mirage. This type of mirage is especially common in hot deserts.

Prisms are designed to bend light by 90° or 180° the phenomenon of total internal reflection, such prisms are used to invert images without changing their size.

When a light incident at one end of the core gets refracted and will be incident on the interface between the core and cladding at an angle greater than the critical angle and the light continues reflecting in the core.

Where u = object distance

Where u = object distance

Let us consider the situation shown in the figure. C1 and C2 are the centers of curvature of two spherical surfaces of the thin lens. O is the object and I' is the image due to the first refraction. Let radii of curvature be R1 and R2.

According to the definition of the focal length f

This is called the “Lens Maker’s formula”.

Consider two lenses A and B of focal length f1 and f2 placed in contact with each other. Let the object be placed at a point O beyond the focus of the first lens A. The first lens produces an image at I1. Since image I1 is real, it serves as a virtual object for the second lens B, producing the final image at I.

For the image formed by the first lens A, we get

For the image formed by the second lens B, we get

If the two lens-system is regarded as equivalent to a single lens of focal length f, we have

so that we get

The derivation is valid for any number of thin lenses in contact.

Power of a Lens

The power of a lens is defined as the reciprocal of the focal length in meters. SI unit of power of lens is Diopter (D).

If several thin lenses of power P1, P2, P3,... are in contact, the effective power of their combination is given by

When white light is incident on a prism, different colors having different wavelengths suffer different deviations. The phenomenon of splitting light into its component colours is known as dispersion. The pattern of colour components of light (VIBGYOR) is called the spectrum of light. The deviation produced by a thin prism depends on the refractive index. 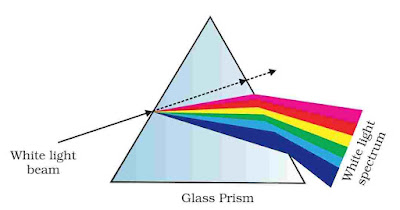 Angular dispersion produced by a prism for white light is the difference in the angles of deviation for two extreme colours i.e. violet and red. It is given by

The dispersive power of a prism is defined as the ratio of angular dispersion to the mean deviation produced by the prism.

Some Natural Phenomena Due to Sunlight

(i). Scattering of Light

The change in direction of light by the particles of the medium through which light passes is known as scattering. As sunlight travels through the earth's atmosphere it gets scattered by the atmospheric particles.

The amount of scattering is inversely proportional to the fourth power of the wavelength. Therefore, the light of shorter wavelengths is scattered much more than light of longer wavelengths.

(iv). Reddish appearance of the sun in full moon near the horizon

At sunrise and sunset sun rays pass through a larger distance through the atmosphere so most of the blue and other shorter wavelengths are removed by scattering. The least scattered light reaches our eyes and the sun seems reddish.

Light enters the eye through the cornea a curved front surface. It passes through the pupil which is the central hole in the iris. The size of the pupil can change under the control of muscles. The light is further focussed by the eye lens on the retina. The retina is a film of nerve fibers covering the curved black surface of the eye. The retina contains rods and cones which sense light intensity and colour respectively and transmit electrical signals via the optic nerve to the brain. 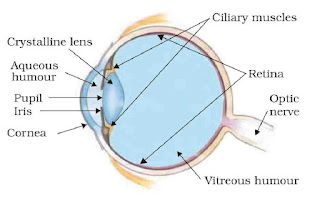 The shape (curvature) and therefore the focal length of the lens can be modified somewhat by ciliary muscles. So images are formed at the retina for objects at all distances. This property of the eye is called accommodation.

The closest distance for which the eye lens can focus light on the retina is called the least distance of distinct vision or the near point. The standard value for normal vision is taken as 25 cm (Symbol D). If the object is too close to the eye; the lens cannot curve enough to focus the image on the retina, and the image is blurred.

# Near sightedness or Myopia

The light from a distant object arriving at the eye lens may get converged at a point in front of the retina. This defect is known as nearsightedness or myopia. A concave lens is used to correct the defect.

If the eye lens focuses the incoming light from a distant object at a point behind the retina, then the defect is called farsightedness or hypermetropia. A convergent lens is needed to compensate for the defect in vision.

This occurs when the cornea is not spherical in shape. It may have large curvature in the vertical plane than in the horizontal plane. It results in lines in one direction being well focussed while those in a perpendicular direction may appear distorted.

A simple magnifier or microscope is a converging lens of a small focal length. The lens nearest the object, called the objective, forms a real, inverted, magnified image of the object. This serves as the object for the second lens, the eyepiece, which functions essentially as a simple microscope or magnifier, producing an enlarged virtual final image. 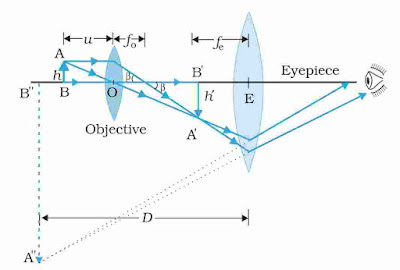 Magnification power is given by

The telescope is used to provide angular magnification of distant objects. It also consists of an objective and an eyepiece. But here, the objective has a large focal length and a much larger aperture than the eyepiece. Light from a distant object enters the objective and a real image is formed in the tube at the second focal point of the convex objective lens. The eyepiece magnifies this image producing a final inverted image. 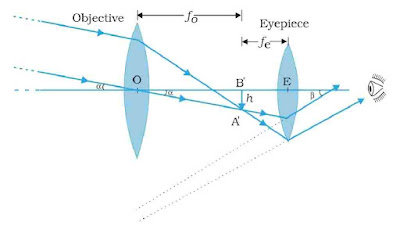 Magnifying power is given by

One such arrangement using a convex secondary mirror to focus the incident light, which now passes through a hole in the objective primary mirror, is known as a reflecting telescope or a Cassegrain telescope. 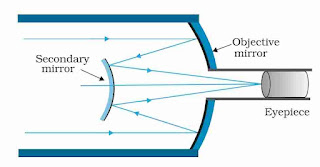 Advantages of taking mirror objectives are