In this chapter you will get to know that light does not always travel in a straight line, indeed light is a wave. It interferes, it diffracts and it even undergoes polarization. This new branch of Physics that deals with the wave nature of light is called “Wave Optics”.

According to this model, a luminous body emits a stream of particles in all directions. The particles are assumed to be very very tiny. It explained the laws of reflection and refraction of light at an interface using concepts of elastic collisions and momentum conservation. Although this law could explain reflection and refraction, this law could not satisfactorily explain a phenomenon like interference, polarization, and diffraction. In 1637, Descartes gave the corpuscular model of light.

The wave theory of light was first put forward by Christian Huygen in 1678. On the basis of his wave theory, Huygen explained satisfactorily the phenomenon of reflection, refraction, and total internal reflection.

According to this principle,

(i). Reflection of a Plane Wave

Let us consider a plane wave AB incident at an angle 'i' on a reflecting surface MN.

Time taken by the wave to advance to point C from point B will be t.

Let EC represent a tangent drawn from C to wavefront from E to the spherical wavefront.

which proves the law of reflection.

(ii). Refraction of a Plane Wave

Let v1 and v2 represent the speed of light in medium-1 and medium-2 respectively. Consider a plane wavefront AB propagating in the direction AA', incident on the medium boundary at point A at an angle of incidence 'i'. Let t be the time taken to travel from B to C. 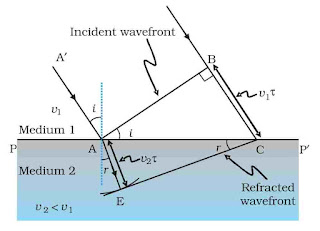 From point A, draw a sphere of radius v2t, let CE represent the forward tangent plane. It is refracted wavefront at t.

which proves law of refraction.

A wavefront is a continuous locus of all those points in a medium that oscillate in the same phase. The physical view of a wavefront is the ripples on a water surface. When a stone is dropped in a water pond, the disturbance travels radially outward and what you see are circular wave-fronts traveling outward.

When light-producing source moves away from the observer the frequency as measured by the observer will be smaller than that is actually generated by the source. Astronomers call the increase in wavelength due to the Doppler effect redshift.

When an observer moves toward the source or the source move towards the observer, then apparent wavelength decreases and the visible spectrum appears to be shifted towards a shorter wavelength. Hence, we call this a blue shift.

Coherent and Incoherent Sources of Light

Two sources of light that continuously emit light waves of the same frequency (or wavelength) with a zero or constant phase difference between them are called coherent sources. Ex- LASER. 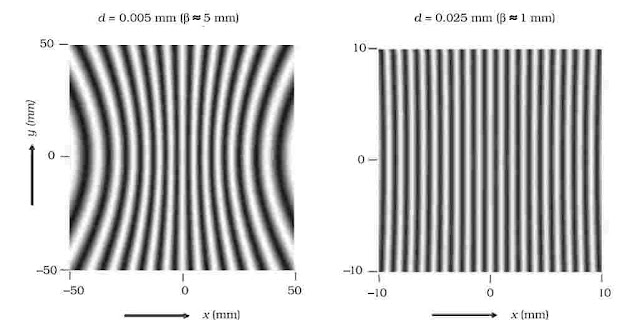 In the diagram, S1 and S12 are narrow slits that are parallel to each other. As S is narrow, it diffracts the light that falls on it and illuminates both S1 and S2. Interference occurs in the region where the light from S1 overlaps that from S2. A series of alternately bright and dark bands can be observed on a screen placed in this region of overlap. 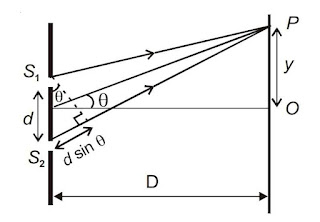 For a point P on the screen, the path difference,

The phase difference between the waves at P = ф

The phenomenon of bending light around the corners of an obstacle is called the diffraction of light. 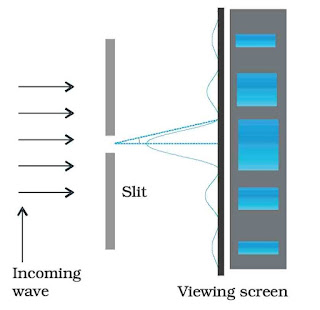 Difference between Diffraction and Interference

It states that the intensity of plane-polarized light that passes through an analyzer varies directly with the square of the cosine of the angle between the plane of the polarizer and the transmission axes of the analyzer.

A device that polarises the unpolarised light passed through it is called a polariser.

When plane polarised light passes through certain substances, the plane of polarization of the light is rotated about the direction of propagation of light through a certain angle. This phenomenon is called optical activity or optical rotation and the substances are optically active.

(i). Polarisation by reflection 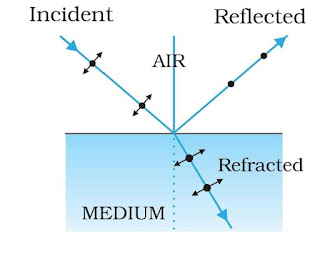 According to Brewster’s law, When unpolarized light is incident on a transparent substance surface, it experiences maximum plan polarization at the angle of incidence whose tangent is the refractive index of the substance for the wavelength.

Q. Show that reflected and refracted beams are mutually perpendicular when the angle of incidence is equal to the polarizing angle.

When light is incident on the small particles of the atmosphere such as dust, and air molecules it is absorbed by the electrons in the molecules, hence electrons start vibrating. These vibrating electrons emit radiations in all directions except in their own line of vibration. The emitted radiations (light) scattered in a direction perpendicular to the direction of incident light are plane polarised. The light in all other directions is partially polarised. 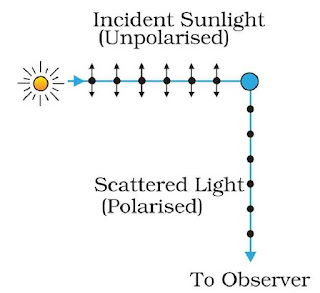