Science is a complex and challenging subject, as it involves so many principles and concepts that are difficult to memorize. Those student who opt for science have to face many challenges and work hard to get good marks in the exam. In this lesson, students will learn about Wave Optics. The best solution of the problem is to practice as many Physics Class 12 Chapter 10 Important Questions as possible to clear the doubts. 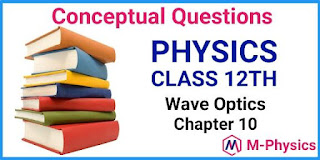 Q.1:- What is a wavefront?
Ans:- A wavefront is a surface of constant phase. A wavefront is also defined as the locus of all the medium particles which at any instant are vibrating in the same phase condition.

Q.3:- Differentiate a ray and a wavefront.
Ans:- A wavefront is surface of constant phase but a ray is a line drawn normal to the wavefront and pointing in the direction of propagation of the wave or wavefront.

Q.5:- If a wave undergoes (a) refraction, and (b) reflection at a surface, what happens to its phase?
Ans:-

Q.6:- What is interference of light?
Ans:- Interference of light is the phenomenon of redistribution of light energy and formation of alternate bright and dark fringes in space when light waves from two coherent light sources superpose on each other.

Q.7:- What are coherent sources of light?
Ans:- Two sources of light are said to be coherent if they emit monochromatic light waves of exactly the same wavelength (or same frequency) such that the originating (initial) phase difference between the waves is either zero or having a constant value.

Q.14:- What is diffraction of light?
Ans:- Diffraction of light is the phenomenon of bending of light round the sharp corners or edges of narrow apertures and obstacles and its spreading even into the regions of geometrical shadow.

Q.15:- State the condition for diffraction of light to occur.
Ans:- The size of the slit or obstacle should be comparable to the wavelength of light used.

Q.18:- In interference and diffraction patterns, we obtain bright and dark fringes. Does it mean that energy has been gained or lost? Give reason.
Ans:- In interference as well as diffraction phenomena, there is no gain or loss of energy. In both these phenomena, light energy is simply redistributed. If it reduces in one region producing a dark fringe, then it correspondingly increases in another region producing a bright fringe. Thus, total energy remains conserved.

Q.26:- What is the main drawback/limitation regarding wave nature of light?
Ans:- A mechanical wave requires a medium for its propagation but light can travel even through vacuum. Huygens assumed the existence of all pervading media called 'Aether' to overcome this problem but the aether medium has not been detected by any experimental means.

Q.27:- Why do we fail to observe the diffraction from a wide slit illuminated by monochromatic light?
Ans:- We know that for diffraction at a single slit, central diffraction maxima extends from θ = 0 to θ = ±(λ/a), where a is the width of slit. For a wide slit, a is large and so value of θ is extremely small. Hence, diffraction fringes cannot be observed.

Q.28:- A parallel beam of monochromatic light falls normally on a narrow slit and the light coming out of the slit is obtained on a screen, kept behind, parallel to the slit plane. What kind of pattern do we observe on the screen, and why?
Ans:- We obtain a diffraction pattern on the screen which consists of a central broad maximum and few diffraction fringes of poor contrast and rapidly decreasing intensity on either side of it. The diffraction pattern is observed due to superposition of wavelets originating from the wavefront incident on the narrow slit.

Q.34:- Comment about the statement that "light added to light may produce darkness".
Ans:- Yes, the statement is possible. If two coherent light waves superpose and are in mutually opposite phase, then the resultant intensity of light at the given point will be the least and we shall get a dark fringe. Effectively, it means that light added to light is producing darkness.

Q.35:- Coloured spectrum is seen when one looks towards the filament of a clear electric lamp through a fine muslin cloth. Explain why.
Ans:- The fine muslin cloth is made of very fine threads and the space between any two consecutive threads behaves as a fine slit. Hence, one observes a diffraction pattern. Since the light of lamp is white light, diffraction maxima or minima for different colours occur at different angles of diffraction. Hence, a coloured spectrum is seen by an observer.

Q.37:- How can you distinguish between an unpolarised light beam, a linearly polarised beam and a partially polarised beam of light by using a polaroid?
Ans:- To identify the light, we place a polaroid in the path of the given light beam and slowly rotate it in its own plane. Observe the intensity of transmitted light. If the intensity goes on changing and in one complete rotation of polaroid two times the light intensity is maximum and two times the light intensity is altogether zero (i.e., it is complete dark), then light falling on polaroid is "plane polarised light".