Science is a complex and challenging subject, as it involves so many principles and concepts that are difficult to memorize. Those student who opt for science have to face many challenges and work hard to get good marks in the exam. In this lesson, students will learn about Ray Optics and Optical Instruments. The best solution of the problem is to practice as many Physics Class 12 Chapter 9 Important Questions as possible to clear the doubts. 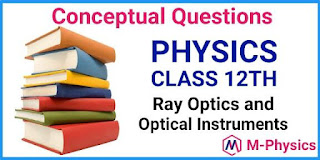 (b) The refractive index for diamond is maximum having a value 2.42 .

Q 18:- Can total internal reflection take place when light travels from rarer to a denser medium?
Ans:- No, it is not possible.

Q 21:- What is a lens? What is its function?
Ans:- A lens is a part of a refracting medium bounded by two nonparallel curved surfaces or one curved and another plane surface. A lens either converges or diverges a light beam passing through it.

Q 38:- What is visual angle?
Ans:- Visual angle is the angle subtended by an object at the eye.

(a) excessive curvature (less focal length) of eye lens, and

(b) elongation of eyeball. Myopia can be corrected by using concave lens. If far point of defective eye is x, then one should use concave lens of focal length f = -x cm for correction of the defect.

(a) less curvature (higher focal length) of eye lens, and

(b) shortening of size of eyeball. Hypermetropia can be corrected by using convex lens of Al appropriate focal length or power.

Q 41:- A person looking at a grid of lines can focus sharply in the horizontal plane but cannot focus so sharp in the vertical plane. With what defect of vision is he/she suffering and what is the remedy?
Ans:- The person concerned is suffering with astigmatism. He should use cylindrical lens of suitable radius of curvature with an appropriately directed axis.

Q 44:- On which principle does a simple magnifier work?
Ans:- If an object is placed between optical centre and principal focus of a convex lens, its virtual, erect and magnified image is formed on the same side of the lens.

Q 47:- What are the characteristics of the final image formed by a compound microscope at the near point of eye?
Ans:- The image formed is virtual, highly magnified and inverted as compared to the original object.

(b) It is easier to prepare a large-sized reflector mirror than an objective lens of same size. Moreover, mechanical support system of reflecting telescope is less cumbersome and easier to operate .

Q 62:- Will a star twinkle if seen from space (say, moon or a spacecraft)?
Ans:- No, a star will not appear twinkling if seen from free space because there will be no atmospheric refraction. The star will appear to be shining continuously.

Q 65:- Violet colour is seen at the bottom of the spectrum, when white light is dispersed by prism. Why?
Ans:- The wavelength of violet-coloured light is the least out of various colours of white light and refractive index of the prism is maximum for violet light. As a result, the violet colour ray suffers maximum deviation and is seen at the bottom of a spectrum formed by a prism.

Q 68:- A ray of white light shows no dispersion on emerging from a glass slab or plate. Explain why.
Ans:- When a ray of white light is incident obliquely on a glass slab or plate the white light ray is splitted up into its constituent colours. Hence, inside the glass or slab, dispersion is taking place. But at the second surface of a slab, the emergent rays corresponding to all the colours are exactly parallel to each other on account of the fact that two refracting faces of a slab or plate are parallel to each other and hence, the angle of emergence `\angle e=` angle of incidence `\angle i`. As a result, the emergent light shows no dispersion and appears white.

Q 70:- What is chromatic aberration? What is its cause?
Ans:- The image of an object in white light, formed by a lens, is usually coloured and blurred. This defect of image is called chromatic aberration. The aberration arises due to the fact that focal length of the lens is minimum for violet colour and maximum for red colour.

(a) To produce the image of a close lying tiny object at the least distance of distinct vision of eye so that it is seen distinctly.

(b) To increase the visual angle at the eye so that the object can be seen in more details.

(c) To improve upon the resolving power of observer's eye.

Q 72:- The nature has provided us two eyes. What is the importance of this gift of nature to us?
Ans:- The two eyes enable us to perceive, besides length and breadth, even the depth of the space. In this manner, we have a three dimensional view of the world around us. If we had been provided only one eye by nature, it would not have been possible to have the idea of the distance of an object from ourselves.

Q 73:- What is the difference between hypermetropia and presbyopia?
Ans:- Persons suffering with either hypermetropia or presbyopia can see distant object clearly but cannot see objects situated near the eye i.e., in both cases, the near point of eye is shifted away from its normal value of 25 cm. However, the cause of these two defects of vision is different. Hypermetropia is caused due to less curvature of cornea as a result of which focal length of the eye lens system increases or its converging power decreases. On the other hand, presbyopia is caused due to decreasing effectiveness of the ciliary muscles and loss of flexibility of the eye lens with growing age. Both these defects of vision can be corrected by using convex lenses of appropriate power.

(a) It is extremely difficult to grind a convex lens of extremely short focal length.

(b) The lens of short focal length becomes a thick lens, which does not form a sharp image of an object due to various defects of images present in a thick lens.

Q 78:- For which position of the object a convex lens forms an image of exactly the same size? What is its use?
Ans:- When an object is placed laterally on the principal axis of a convex lens at a distance 2f, then its real and inverted image of exactly the same size is formed on other side of the lens at a distance 2f from the lens. This property of a convex lens is used by an inverting lens which inverts the object without causing any magnification.

Q 79:- Under what condition is a prism not visible when dipped in a liquid? What will be the angle of deviation suffered by a light ray in that situation?
Ans:- The prism is not visible if it is immersed in a liquid whose refractive index is same as that of prism material. In that situation, a light ray will go straight through the prism and will not suffer any deviation.

Q 81 :- An air bubble in water shines brilliantly and appears silvery. Why?
Ans:- An air bubble in water shines brilliantly due to total internal reflection at its outer surface. Here, light is propagating from water (optical denser medium) to air (optically rarer medium). Therefore, if as shown in the following figure, the incident ray subtends an angle i > ic (Where ic, for water-air interface is 48.6°), the light is totally internally reflected. As a result, the surface of air bubble appears silvery one.

Q 83:- In microscopes and telescopes, we generally use two or more lenses in contact to prepare objective or eyepiece lenses. Why?
Ans:- By having a combination of two or more lenses in contact, we can design lenses of desired values of focal lengths. We can also eliminate chromatic as well as spherical aberrations by this method. The arrangement helps in increasing the angular magnification of instrument as well as its field of view.

Q 87:- How can you distinguish between a plane mirror, a concave mirror and a convex mirror without actually touching them?
Ans:- We can identify a mirror by simply viewing our image formed by it. If one stands near a plane mirror, he sees an erect image of same size. As the person moves away from the mirror, the image remains erect and of same size.