In this chapter, we shall study some common physical properties of liquids and gases. How are fluids different from solids? What is common in liquids and gases? Unlike a solid, a fluid has no definite shape of its own. Solids and liquids have a fixed volume, whereas a gas fills the entire volume of its container.

Liquids and gases can flow and are therefore, called fluids. Earth has an envelop of air and two-thirds of its surface is covered with water. All the processes occurring in living beings including plants are mediated by fluids.

We can define pressure as the normal force acting per unit area of a surface. It is denoted by P and SI unit of it is pascal (Pa). It is a scalar quantity.

We observe that the same force (weight) exerts different pressures for different areas in contact. Lesser the area, more is the pressure exerted for a given force.

The density of any material is defined as its mass per unit its volume. If a fluid of mass m occupies a volume V, then its density is given as

Density is usually denoted by the symbol ρ. It is a positive scalar quantity. Its SI unit is kg m–3 and its dimensions are [ML–3].

This law states that the pressure in a fluid at rest is same at all points which are at the same height. 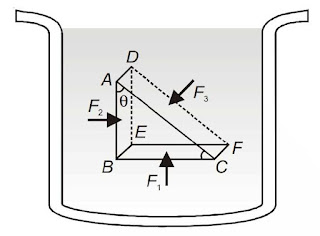 Imagine a small element of fluid in the shape of a right angled prism. All its points lie at the same depth inside the liquid. Therefore the effect of gravity is same at all these points. The forces exerted by rest of the fluid on different surfaces of this fluid element are as follows:

If A1, A2 and A3 are the surface areas of faces respectively, then by dividing.

So, the pressure exerted is same in all directions in a fluid at rest, at the points at equal height.

Variation of Pressure with Depth

Imagine a fluid element in the shape of a cylinder as shown. If A be the area of the top and the bottom of this cylinder, then

Since, the fluid remains at rest, therefore the force F2, which acts upwards should balance the two downward forces. These are, the force F1 exerted at the top of the cylinder, and the weight W of the fluid confined within the cylinder.

If ρ is the density of the fluid, then

This result tells us that as we go deep down a liquid the pressure goes on increasing. This pressure depends only on the height of the liquid column above the point.

When we remove atmospheric pressure from total pressure of any system then this remaining pressure is called Gauge Pressure. The excess pressure P–Pa, at depth h is called a gauge pressure at that point. 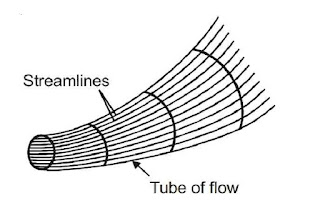 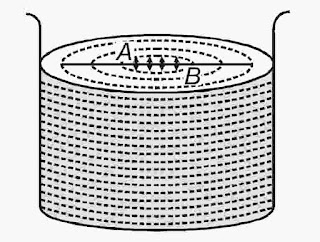 A tube of very fine bore is called a capillary. ‘Capilla’ is a Latin word which means hair. Thus, capillary is a very thin tube. When such a tube, open at both ends, is dipped in a beaker containing water, water rises in it against gravity.

If the angle of contact for this liquid and the capillary tube is acute, the liquid forms a concave meniscus.

When a fluid moves, it flows in the form of parallel layers. These layers exert a force on each other which tends to oppose their relative motion. This is similar to what a frictional force does when two solids in contact move or tend to move over each other. The property of fluid which gives rise to such frictional force in them, is called viscosity. It is denoted by ‘η’. Its SI unit is N s m–2 or Pa s which is also called poiseuille (Pl). The dimensions of viscosity are [ML–1T–1]. A = area of layer 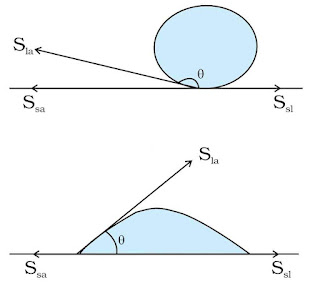 When a spherical ball is dropped in a liquid, he observed that the viscous force F experienced by the ball is proportional to the

– velocity of the object through the fluid, v

– viscosity of the fluid, η

– radius of the sphere, r

Here, the constant of proportionality is found to be 6π.

The negative sign in the above expression just indicates that the retarding force is opposite to the direction of motion of the object.

The maximum constant velocity acquired by a body while falling through a viscous medium is called its terminal velocity. It is usually denoted by VT.

When the body acquires terminal velocity,

Whether a flow will be turbulent or not, is decided by a dimensionless parameter called Reynolds number Re. This parameter is given by the relation

where, ρ = density of the fluid

v = velocity of the fluid

η = viscosity of the fluid

d = diameter of the pipe through which the fluid flows

The Poiseuille’s formula gives an expression for volume flow rate through a capillary tube of inner radius r and length l due to a pressure difference between its ends, P. The volume flow rate is represented by Q such that

Here, η is the coefficient of viscosity and all symbols have standard meaning.