In this chapter, we shall examine some of the thermal properties of matter. We will first consider thermal expansion which plays an important role in everyday life and then discuss changes of phase and latent heat. At the end, we will discuss the phenomenon of heat transfer.

When a body is heated, various changes take place. Temperature is a measure of ‘hotness’ of a body. A kettle with boiling water is hotter than a box containing ice. When water boils or freezes, its temperature does not change during these processes even though a great deal of heat is flowing into or out of it.

A physical property that changes with temperature is called a thermometric property. When a thermometer is put in contact with a hot body, the mercury expands, increasing the length of the mercury column.

Kelvin Scale is a scale of measuring of temperature, the melting point of ice is taken as 273 K and the boiling point of water as 373 K the space between these two points is divided into 100 equal intervals.

To convert a temperature from one scale to the other, we must take into account the fact that zero temperatures of the two scales are not the same.

Note: The normal temperature of the human body measured on the Celsius scale is 37°C which is 98.6°F.

An equation which follows the law of Boyal, law of Charls and llaw of Avogadro is called ideal gas equation.

At constant T and P,

By combinig all above equation, we get

where, n = Number of moles of gas 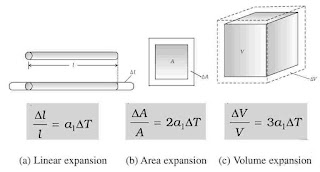 If an amount of heat Q, when given to a body of mass m, increases its temperature by an amount ΔT, then

Specific heat of the material of a substance is the amount of heat required to raise the temperature of unit mass of the substance through 1C°.

Calorimetry deals with the measurement of heat. The vessel which is largely used in such a measurement is called a calorimeter.

When two bodies at different temperatures are allowed to share heat, they attain a common temperature. If it is assumed that no heat is received from or given to any body outside the system and if there is no chemical action involved in the process of sharing, then

This simple statement based on the law of conservation of energy is called the principle of calorimetry.

Depending on temperature and pressure, all matter can exist in a solid, liquid or gaseous state. These states or forms of matter are also called the phases of matter.

The change of state from solid to liquid is called melting and from liquid to solid is called fusion. It is observed that the temperature remains constant until the entire amount of the solid substance melts. That is, both the solid and the liquid states of the substance coexist in thermal equilibrium during the change of states from solid to liquid.

The temperature at which the solid and the liquid states of the substance is in thermal equilibrium with each other is called its melting point. The change of state from liquid to vapour (or gas) is called vaporisation. It is observed that the temperature remains constant until the entire amount of the liquid is converted into vapour.

Latent heat is defined as the heat or energy that is absorbed or released during a phase change of a substance. It could either be from a gas to a liquid or liquid to solid and vice versa. Latent heat is related to a heat property called enthalpy. It is denoted by L and its SI unit is J/kg.

There are two types of latent heat.

(i). Latent Heat of melting

It is a amount of heat which is required to change of phase from solid to liquid for unit mass at constant temperature. Ex- Latent heat of melting of ice is 3.33 x 105 J/kg.

It is a amount of heat which is required to change of phase from liquid to vapor for unit mass at constant temperature. Ex- Latent heat of vaporization of water is 22.6 x 105 J/kg.

There are three mechanisms of heat transfer which name is given as- conduction, convection and radiation. Conduction occurs within a body or between two bodies in contact. Convection depends on motion of mass from one region of space to another. Radiation is heat transfer by electromagnetic radiation, such as sunshine, with no need for matter to be present in the space between bodies.

Conduction is the mechanism of transfer of heat between two adjacent parts of a body because of their temperature difference. Suppose, one end of a metallic rod is put in a flame, the other end of the rod will soon be so hot that you cannot hold it by your bare hands.

Here, heat transfer takes place by conduction from the hot end of the rod through its different parts to the other end. Gases are poor thermal conductors, while liquids have conductivities intermediate between solids and gases.

Convection is a mode of heat transfer by actual motion of matter. It is possible only in fluids. Convection can be natural or forced. In natural convection, gravity plays an important part. When a fluid is heated from below, the hot part expands and, therefore, becomes less dense. Because of buoyancy, it rises and the upper colder part replaces it. This again gets heated, rises up and is replaced by the relatively colder part of the fluid. The process goes on.

Radiation is the transfer of heat by electromagnetic waves such as visible light, infrared, and ultraviolet rays. Everyone has felt the warmth of the sun’s radiation and intense heat from a charcoal grill or the glowing coals in a fireplace. Most of the heat from these bodies reaches you not by conduction or convection in the intervening air but by radiation. This heat transfer would occur even if there were nothing but vacuum between you and the source of heat. 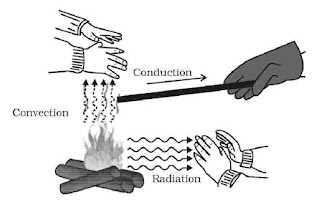 The amount of heat energy rediated per unit area of the surface of a body, per unit time and per unit wavelength range is constant which is called as the ’emissive power’ (eλ) of the given surface, given temperature and wavelength. Its S.I. unit is Js-1 m--2.

The ‘absorptive power’ of a surface at a given temperature and for a given wavelength is the ratio of the heat energy absorbed by a surface to the total energy incident on it at a certain time. It is represented by (aλ). It has no unit as it is a ratio.

A body is said to be a perfect black body, if its absorptivity is 1. It neither reflects nor transmits but absorbs all the thermal radiations incident on it irrespetive of their wavelengths.

This law states that as the temperature increases, the maximum value of the radiant energy emitted by the black body, move towards shorter wavelengths. Wein found that “The product of the peak wavelength (λm) and the Kelvin temperature (T) of the black body should remain constant.”

This law states that the thermal radiations energy emitted per second from the surface of a black body is directly proportional to its surface area A and to the fourth power of its absolute temperature T.

Emission coefficient or degree of blackness of a body is represented by a dimensionless quantity ε, 0 < ε < 1. If ε = 1 then the body is perfectly black body. Hence

According to Newton’s law of cooling, "The rate of loss of heat of a body is directly proportional to the excess of the temperature (T–T0) of the body with respect to the surroundings".