The foundation of thermodynamics is the conservation of energy and the fact that heat flows spontaneously from hot to cold body and not the other way around. The study of heat and its transformation to mechanical energy is called thermodynamics. It comes from a Greek word meaning “Movement of Heat”.

In this chapter, we shall study the laws of thermodynamics, various thermodynamic processes, basic theory of heat engines, refrigerators and Carnot engine. 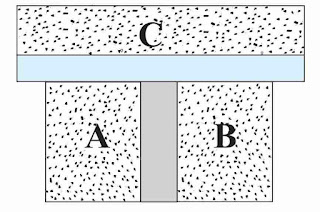 Heat is that form of energy which gets transferred between a system and its surrounding because of temperature difference between them. Heat flows from the body at a higher temperature to the body at lower temperature. The flow stops when the temperature equalises. i.e., the two bodies are then in thermal equilibrium.

Work Done by a Gas

A container of cross sectional area A is fitted with a movable piston. Let the pressure of gas is P. Due to force applied by gas on piston, piston is displaced by Δx

The first law of thermodynamics is a particular form of the general law of conservation of energy. Suppose the amount of heat Q is supplied to a system. It is normally spent in two ways.

If ΔU the change in internal energy "since energy can neither be created nor destroyed but only convert from one form to another", we have then

If dQ, dU and dW are infinitesimal changes in heat, internal energy and work respectively, then equation (1) becomes

This equation represents the differential form of first law of thermodynamics.

Limitations of First Law of Thermodynamics

Specific heat capacity of a substance is defined as the heat required to raise the temperature of unit mass through 1°C (or 1 K).

Heat capacity of a substance is given by

If we divide S by mass of the substance m in kg, we get

It is defined as the amount of heat required to raise the temperature of a 1 mole of a gas through 1°C when its volume is kept constant. It is denoted by (Cv) and given by

It is defined as the amount of heat required to raise the temperature of 1 mole of the gas through 1°C when its pressure is kept constant. It is denoted by (Cp) and given by

On the other hand, at constant pressure,

Now, for a mole of an ideal gas

This formula is known as Mayer's Formula. All the three quantities (Cp), (Cv) and R in this equation should be expressed in the same units either in joule/mole°C or in cal/mole°C.

The parameters or variables which describe equilibrium states of the system are called state variables.

These are the variables which are independent of the size. e.g., pressure, density and temperature.

These are the variables which depend on the size of the system. e.g., volume, mass, internal energy.

The relation between the state variables is called the equation of state.

Hence, for an ideal gas all heat is converted into work in isothermal process.

When a thermodynamic system undergoes a process under the condition that no heat comes into or goes out of the system, then the process is said to be adiabatic process. Such a process can occur when a system is perfectly insulated from the surroundings.

If the working substance is taken in expanding chamber in which the pressure is kept constant, the process is called isobaric process. In this process the gas either expands or shrinks to maintain a constant pressure and hence a net amount of work is done by the system or on the system.

If a substance undergoes a process in which the volume remains unchanged, the process is called an isochoric process. The increase of pressure and temperature produced by the heat supplied to a working substance contained in a non-expanding chamber is an example of isochoric process.

Any "cyclic" device by which heat is converted into mechanical work is called a heat engine. For a heat engine there are three essential requirements :

In a heat engine, the working substance takes in heat from the source, converts a part of it into external work, gives out the rest to the sink and returns to its initial state. This series of operations constitute a cycle. The work can be continuously obtained by performing the same cycle over and over again.

Suppose the working substance takes in an amount of heat Q1 from the source, and gives out an amount Q2 to the sink. Let W be the amount of work obtained. The net amount of heat absorbed by the substance is Q1 - Q2, which has been actually converted into work. Applying the first law of thermodynamics to one complete cycle. We get

The thermal efficiency (e) of an engine is defined as the ratio of the work obtained to the heat taken in from the source, that is,

This equation indicates that the efficiency of the heat engine will be unity (efficiency 100%) when Q2 = 0. This is, however, not possible in practice, This means that the engine cannot convert all the heat taken in from the source into work.

A reversible process is one which can be retraced in opposite order by slightly changing the external conditions. The working substance in the reverse process passes through all the stages as in the direct process in such a way that all changes occurring in the direct process are exactly repeated in the opposite order and inverse sense and no changes are left in any of the bodies participating in the process or in the surroundings.

Those process which can not be retraced in the opposite order by reversing the controlling factors are known as irreversible processes.

This may be stated as, "It is impossible to construct a device which operating in a cycle, has a sole effect of extracting heat from a reservoir at performing an equivalent amount of work". Thus, a single reservoir at a single temperature can not continuously transfer heat into work.

Reversible Process: A thermodynamic process is said to be reversible if the process can be turned back such that both the system and the surroundings return to their original states, with no other change anywhere else in the universe. Ex- extension of springs, slow adiabatic compression or expansion of gases.

Irreversible Process: An irreversible process can be defined as a process in which the system and the surroundings do not return to their original condition once the process is initiated. Ex- Relative motion with friction, Heat transfer.

A reversible heat engine operating between two temperatures is called a Carnot engine and the sequences of steps constituting one cycle is called the Carnot cycle.

Carnot gave the most important results which are: