Gases have negligible force of molecular interaction. They have no shape and size and can be contained in vessels of any shape and size. So, gases expands indefinitely and uniformly to fill the available space by considering that gases are made up of atomic particles, many scientists like Boyle and Newton tried to explain the behaviour of gases.

But the real theory was developed in the nineteenth century by Maxwell and Boltzmann. In this chapter we shall study some of the features of kinetic theory.

John Dalton, about 200 years ago, proposed the atomic theory. According to this theory

In gases molecules are far from each other and due to this the interatomic forces between the molecules is negligible except, when two molecules collide. Hence, the properties of gases are easier to understand than those of solids and liquids.

Gases satisfy a simple relation between pressure, temperature and volume at low pressure and high temperature, this relation is given by equation

Where all symbols have their usual meaning.

According to this hypothesis, "At a fixed temperature and pressure the number of molecules per unit volume is same for all gases".

According to this law, keeping temperature constant, the pressure of a given mass of a gas varies inversely with volume. If n and T are fixed in ideal gas equation then, PV is constant.

According to this law, the volume (V) of a given mass of a gas is directly proportional to the temperature of the gas, provided pressure of the gas remains constant.

According to this law, the pressure P of a given mass of a gas is directly proportional to its absolute temperature T, provided the volume V of the gas remains constant.

According to this law, the total pressure of a mixture of non-interacting ideal gases is the sum of partial pressures.

It states that rate of diffusion of a gas is inversely proportional to the square root of the density of the gas.

Hence, denser the gas, the slower is the rate of diffusion.

Kinetic Theory of an Ideal Gas

Kinetic theory of gases is based on the molecules picture of matter. According to which 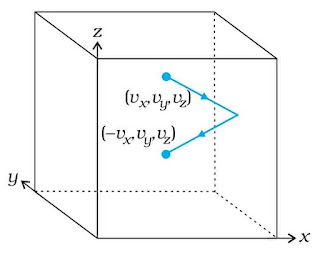 Law of Equipartition of Energy

For a dynamic system in thermal equilibrium, the energy of the system is equally distributed amongst the various degrees of freedom and the energy associated with each degree of freedom per molecule is 1/2 kT, where k is Boltzman constant.

Degrees of freedom of a system is defined as the total number of co-ordinates or independent quantities required to describe the position and configuration of the system completely.

Mono-, di-, and polyatomic (N) molecules have, 3,5 or (3N-K) number of degrees of freedom where K is the number of constraints.

Specific heat capacity is defined as the amount of heat energy required to raise the temperature of a gas by one degree celsius.

The molecule of a monatomic gas has only three translational degrees of freedom. Thus, the average energy of a molecule at temperature T is (3/2)kB T . The total internal energy of a mole of such a gas is

The molar specific heat at constant volume, Cv, is

A diatomic molecule treated as a rigid rotator, like a dumbbell, has 5 degrees of freedom: 3 translational and 2 rotational. Using the law of equipartition of energy, the total internal energy of a mole of such a gas is

The molar specific heats are then given by

In general, a polyatomic molecule has 3 translational, 3 rotational degrees of freedom and f vibrational modes. According to the law of equipartition of energy, the total internal energy for one mole of polyatomic gas can be calculated as

Mean free path of a molecule in a gas is the average distance travelled by the molecule between two successive collisions.

If λ1, λ2, λ3,.... λN be the free paths tavelled by the molecule in N successiv colllision, then mean free path is given by