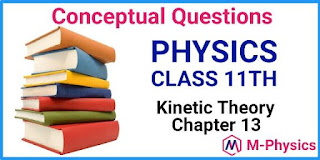 (a) proportional to its absolute temperature, and

(b) inversely proportional to its pressure.

Q. 9. Neglecting the vibrational modes, write the number of degrees of freedom per molecule of a

Ans. If vibrational modes are neglected, then number of degrees of freedom per molecule in a

Q. 10. A cylinder fitted with a piston contains one mole of oxygen and two moles of nitrogen at room temperature. Find the ratio of average internal energy per molecule of these gases.
Ans. As both the gases are diatomic gases and have equal numbers of degrees of freedom. Hence, average value of their internal energy per molecule will be exactly same or the ratio will be 1.

Q. 13. A certain mass of gas is enclosed in a container. When temperature of the gas is raised, its pressure rises. How will you explain this on the basis of kinetic theory of gases?
Ans. As per kinetic interpretation of temperature, the average kinetic energy of gas molecules is proportional to its absolute temperature. When temperature of a gas is raised, the value of kinetic energy and hence rms speed of gas molecules increases. As a result, during each collision a molecule will impart greater momentum to a wall of container. Moreover, due to increase in rms speed, frequency of collision of molecules with a wall increases. Thus, a greater momentum is transferred per unit time to the wall and consequently, gas pressure increases.

Q. 16. Why does the temperature of a gas rise when the gas is suddenly compressed? Explain on the basis of kinetic theory of gases.
Ans. When a gas is suddenly compressed, the volume of the gas is reduced and so the number of gas molecules per unit volume increases. As a result, the kinetic energy of gas molecules per unit volume increases. Consequently, temperature of the gas rises.

Q. 25. Can you suggest a kinetic interpretation of evaporation process?
Ans. Evaporation is a slow process which takes place from the free surface of a liquid at all temperatures. As per kinetic theory at a given temperature, even in a liquid, molecules are under going random motion with varying speeds. High speed molecules of a liquid due to their high value of kinetic energy may overcome the intermolecular attractive force due to neighbouring liquid molecules and hence may vaporise and escape from the surface of liquid, thus, giving rise to the phenomenon of evaporation.