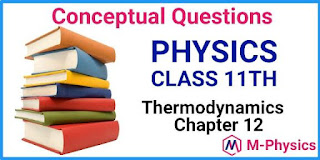 (b) Under adiabatic condition, specific heat capacity of a gas is zero.

(a) Temperature of each and every part of the system must be exactly same.

(b) There should be no net unbalanced force or torque on a part or whole of the system.

(c) There should be no change in the system with time due to chemical reactions, i.e., chemical composition of the system must remain same throughout.

(a) isochoric process is a straight line parallel to pressure axis (or perpendicular to the volume axis), and

(b) isobaric process is a straight line parallel to volume axis.

Q. 10. Milk is poured into a cup of tea and is mixed with a spoon. Is this a reversible process? Why?
Ans. The process is an irreversible process. When milk poured into a cup of tea is mixed by stirring with a spoon, work is done on the system and hence, internal energy of the system slightly increases. If, by some process, we want to separate milk from the tea, we cannot recover the work done during mixing process. Rather we shall require more work to be done. Thus, it is clear that the process is irreversible.

Q. 15. On removing valve of a bicycle tube, the escaping air becomes cool. Why?
Ans. Inside a bicycle tube, air is filled at a pressure greater than the atmospheric pressure. When valve of tube is removed, the air present inside the tube suddenly expands adiabatically. As a result of adiabatic expansion of air, the temperature of air falls and as a result, the air escaping from the bicycle tube becomes cool.

Q. 21. If efficiency of a Carnot engine is independent of the nature of working substance, then perhaps real engines should also be similarly independent upto a certain extent. Why then, for real engines, we are so concerned to find a suitable fuel like coal, petrol, etc. Why do we not use stones as fuel?
Ans. Of course, efficiency of a heat engine may be independent of the nature of working substance, but to convert heat into work by an engine, we need initial absorption of heat by the engine from a heat source. Fuel used in engine on combustion provides the requisite amount of heat. Hence, we want to find a suitable fuel which provides large amount of heat on combustion. A stone cannot produce heat by combustion process.

(b) In an adiabatic process, total heat content of the system remains constant and there is no exchange of heat with its surroundings, i.e.,

Q. 27. A thermos flask contains coffee. The flask is vigorously shaken. Consider the coffee as a system.

(b) No, heat has not been added to the system.

(c) Yes, work has been done on the system.

(d) Yes, due to rise in temperature, the internal energy of the system rises.