In the previous chapter, we have learnt about "Laws of Motion". In this chapter, we shall study notion of work and energy and relation between work and energy by the help of work energy theorem. The terms ‘work’, ‘energy’ and ‘power’ are frequently used in everyday language. A farmer ploughing the field, a construction worker carrying bricks, a student studying for a competitive examination, an artist painting a beautiful landscape, all are said to be working.

The Scalar or Dot Product of Two Vectors

Work Done by a Force

The work done by the force is defined to be the product of component of the force in the direction of the displacement and the magnitude of this displacement.

We see that if there is no displacement, there is no work done even if the force is large. Thus, when you push hard against a rigid brick wall, the force you exert on the wall does no work.

No work is done if

Energy is a physical quantity which enables a system to perform work. There are so many form of energy like heat energy, sound energy, nuclear energy which will be discussed in their respective topics. Here we will discuss mechanical energy.

It is a scalar quantity. It is a measure of the work an object can do because of its motion. Sailing ships use KE of the wind. KE of a fast-flowing stream has been used for grinding corn.

Relation between KE and linear momentum

Potential energy is the energy that an object has because of its position relative to other objects. It is usually defined in equations by the capital letter U or sometimes by PE.

Gravitational potential energy as a function of the height h, is denoted by U(h) and it is the negative of work done by the gravitational force in raising the body to that height.

The SI unit of potential energy is Joule, the same as kinetic energy or work. Commercial unit of energy is kWh, 1 kWh = 3.6 x 106 J.

where, k = force constant of given spring

The Law of Conservation of Energy

The Conservation of Mechanical Energy

According to this, "The total mechanical energy of a system is conserved if the forces doing work on it, are conservative."

Suppose that a body undergoes displacement Δx under the action of a conservative force F. From the work-energy theorem,

If the force is conservative, the potential energy function U(x) can be defined such that

Adding the above two equations, we get

The work-energy theorem states that the work done by all forces acting on a particle is equal to the change in the particle’s kinetic energy.

Confining to one dimension, rate of change of kinetic energy with time is

Where Ki and Kf are the initial and final kinetic energies corresponding to xi and xf respectively.

The instantaneous power is defined as the limiting value of the average power as time interval approaches zero.

The instantaneous power can also be expressed as

where `\vec{v}` is the instantaneous velocity when the force is `\vec{F}`. Power is a scalar quantity like work and energy. Its dimensions are [ML2T–3]. Its SI unit is Watt (W). 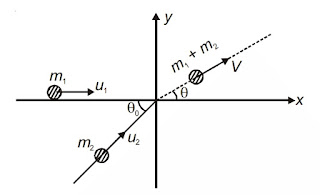 If two object collide during their motion then this event is called Collision. Generally, collisions are two type-

When there is a loss of kinetic energy, in any collision Then this tyoe of collision is called perfectly inelastic collision. As, When a soft mud ball is thrown against the wall