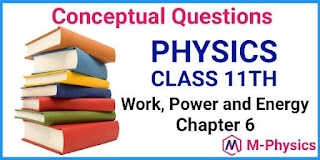 Q.2. What is the work done by a person in holding a 15 kg suitcase, while waiting for a bus for 15 min.
Ans. It is zero. It is because the displacement is zero.

Q.5. No work is done against gravity, while moving a body along horizontal. Why?
Ans. It is because the gravity and the displacement are perpendicular to each other. Therefore,

Q.7. A man carrying a bucket of water walks on a horizontal road with uniform velocity. What is the work done by him?
Ans. Zero. It is because the displacement and the force required to hold the bucket are perpendicular to each other.

Q.8. What is the amount of work done by a force, when a body moves in a circular path?
Ans. Zero. It is because, the centripetal force needed to revolve the body is always perpendicular to the circular path.

Q.10. What is the amount of work done by

(a) a weightlifter is holding a weight of hundred kg on his shoulders for 40 s ?

(b) the earth's gravitational force in keeping the moon and its orbit (assumed perfectly circular) ?

(c) a locomotive against gravity, if it is travelling on a level plane ?

(d) an electron moving with half the speed of light in empty space free of electromagnetic field and far from all matter.
Ans.

Q.11. Give one example each of the following:

Q.13. Give SI unit of work.
Ans. It is joule (J). Work done is said to be one joule if a force of one newton displaces a body through one metre in the direction of force.

Q.15. What is gravitational unit of work?

Ans. In SI, gravitational unit of work is kg m.

Q.17. Define conservative force. Give its two examples.
Ans. A force is said to be conservative, if work done by the force over a closed path is zero. Examples: gravitational and electrostatic force.

Q.20. Can kinetic energy of an object be negative?
Ans. No.

Work done is said to be one joule, if a force of one newton displaces a body through one metre in the direction of force.

Q.22. Define one kilowatt hour.
Ans. It is the energy consumed by an appliance of power one kilowatt in one hour.

The power of an agent is said to be one watt, if one joule of work is done in one second.

Q.26. What is horse power?
Ans. It is the practical unit of power used in engineering.

Q.30. Which spring has greater value of spring constant - a delicate or a stout spring?
Ans. A stout spring.

Q.31. A spark is produced, when two stones are struck against each other. Why?
Ans. Work done in striking the two stones gets converted into heat energy, which appears as spark.

Q.39. "The earth moving round the sun in a circular orbit is acted upon by a force and hence work must be done on the earth by the force." Do you agree with this statement?
Ans. The gravitational force on the Earth due to the sun is a conservative force. Since the work done by a conservative force or a closed path is always zero (irrespective of the nature of the path), the work done by the gravitational force over every complete orbit of the Earth is zero.

Q.41. "Chemical, gravitational and nuclear energies are nothing but potential energies for different types of force in nature." Explain this statement clearly with examples.
Ans. A system has potential energy, when the objects constituting the system are held at certain distance against the force between them. Chemical energy results from the chemical bonding between the atoms. Gravitational energy results, when the objects are held at some separation against the gravitational force of attraction. Nuclear energy is the result of the nuclear force between the nucleons.

Q.43. In a thermal station, coal is used for the generation of electricity. Mention how energy changes from one form to another before it is transformed into electrical energy.
Ans. The heat energy produced by burning the coal is used to convert water into steam. The heat energy of the steam is converted into mechanical energy, when the steam is made to rotate the blades of the turbine. The mechanical energy so obtained is converted by the generators into electrical energy.

Q.44. Coal is burnt in a city electric power plant to make steam to run a steam turbine that drives an electric generator. The city water department uses electric supply to run an electric motor to pump water from a well into a stand pipe on a hill top. List, in order, all the energy changes that take place.
Ans. When coal is burnt, the chemical energy of the coal is changed to thermal energy of the flame. The energy of the flame is transferred to water, which takes the form of steam. The thermal energy of the steam (which resides in the steam molecules in the form of their kinetic energy) is used to impart kinetic energy to the turbine rotor due to the collision of the steam molecules with its vanes. The rotation of the turbine shaft turns the generator rotor and thus produces electrical energy.