Q.1. What is projectile? Ans. Any object projected into space or air touch that it moves under the effect of gravity alone is called a projectile. 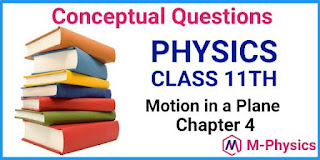 Q.1. What is projectile?
Ans. Any object projected into space or air touch that it moves under the effect of gravity alone is called a projectile.

Q.2. What do we mean by trajectory?
Ans. The path followed by the projectile is called its trajectory.

Q.4. Define unit vector.
Ans. A vector divided by its magnitude is called a unit vector along the direction of the vector.

Q.6. Can a vector be zero if one of its components is not zero?
Ans. No. For example, consider a vector along Z-axis. Its components along x-axis and y-axis will be zero but it itself will not be equal to zero.

Q.7. Can the walking on a road be an example of resolution of vectors?
Ans. Yes, when a man walks on the road he presses the road along an oblique direction the horizontal component of the reaction helps the man to walk on the road.

Q.8. Can any of the components of a given vector have a greater magnitude than that of the vector itself?
Ans. Yes, provided the components are not rectangular.

Q.9. Give a few examples of motion in two dimensions.
Ans. A bag dropped from an aircraft flying horizontally, a gun shot fired at some angle with the horizontal, etc.

acceleration along the horizontal = 0

and acceleration along the vertical = g

Q.11. What is the angle of projection for a projectile thrown parallel to horizontal?
Ans. It is 0°.

Q.13. Two balls are released simultaneously from certain height, one is allowed to fall freely and other thrown with some horizontal velocity. Will they hit the ground together? Substantiate your answer with proper reasoning.
Ans. Both the balls will hit the ground together. It is because the two balls fall through the same height and the initial velocity of both the balls along the vertical is zero.

Q.14. A hunter aims his gun and fires directly at a monkey sitting in a tree. The moment the bullet leaves the barrel of the gun the monkey falls. Will the bullet hit the monkey?
Ans. Yes, the bullet will hit the monkey. It is because of the fact that both the monkey and the bullet fall through the same height and the initial velocity of both of them along the vertical is zero.

Q.17. Can the velocity of a particle change even if its speed is constant? Give example.
Ans. Yes. For example, when a body moves along a circular path with constant speed, it possesses centripetal acceleration due to continuous change in its direction of motion.

Q.18. A body is dropped freely from the window of a train. Will the time of the free fall be equal, if the train is stationary, the train moves with a constant velocity, the train moves with an acceleration?
Ans. The motion of the train only affects the magnitude of the horizontal component of velocity and the acceleration of the body along the horizontal, if any. It does not affect the nature of the motion along the vertical. Therefore, in all the three cases, the time of free fall of the body will be equal.

Q.19. A person sitting in a moving train throws a ball vertically upwards how does the ball appear to move to an observer (a) inside the train (b)outside the train?
Ans.