Imagine a world where there are no electric lights, no trains, no telephones, and no personal computers. It was life before the discovery of electromagnetic induction. A Revolutionary invention as a result of the experiments of Michael Faraday and Joseph Henry.

In this chapter, we will study the experiments of electromagnetic induction and their applications.

The Experiments of Faraday and Henry 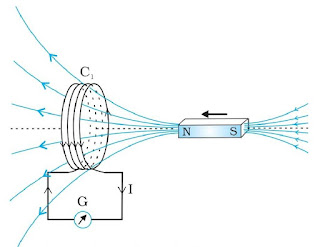 Like electric flux, magnetic flux is proportional to the number of magnetic field lines passing through a surface. It is denoted by ΦB. It is a scalar quantity. 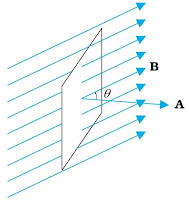 According to this law, "The magnitude of the induced emf in a closed loop is equal to the time rate of change of magnetic flux through the loop."

In case of a coil of N turns, induced emf

Lenz’s Law and Conservation of Energy

Lenz's law is in accordance with the law of conservation of energy. As the induced current opposes the change in flux, work has to be done against the opposition offered by the induced current in changing the flux. The work done appears as electrical energy in the loop.

Consider a particle of charge q0 moving around the ring in a circular path. The work done by the induced electric field in one revolution is W = q0ε, where ε is the induced emf.

Even when bulk pieces of conductors are subjected to changing magnetic flux, induced currents are produced in them, these currents are called eddy currents. 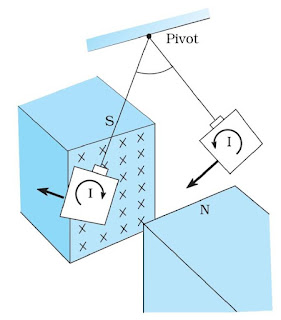 Eddy currents are undesirable since they heat up the core and dissipate electrical energy in the form of heat. Eddy currents are minimized by using laminations of metal to make a metal core. This arrangement reduces the strength of the eddy currents.

Eddy currents are used to advantage in certain applications like:

Self-inductance is the property of a coil, by which an induced emf is developed in itself due to a change in the strength of the current flowing through the coil itself.

Let a current 'i' flows through the inductor. Due to this current, a flux Φ is linked with it such that

The induced emf is given by

(i). Self Inductance of a solenoid

Let a current 'i' be flowing through the solenoid. There is a uniform magnetic field B = μ0ni in its core. The total flux linked with the solenoid is

(ii). Energy Stored in an Inductor

The phenomenon by which an induced emf is produced in one coil due to a change in the strength of the current flowing through another coil is called mutual induction.

When a current i flows through one of the coils, a flux Φ is linked with another coil such that

The constant M is called the coefficient of mutual inductance between the coils. 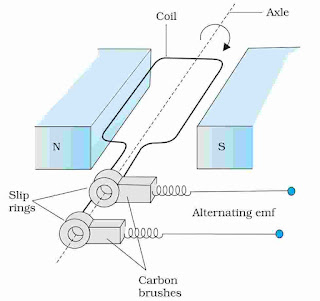 From Faraday’s law, the induced emf for the rotating coil of N turns is, then,

Thus, the instantaneous value of the emf is

If we denote NBAω as ε0,

The direction of the current changes periodically and therefore the current is called alternating current (ac).