Science is a complex and challenging subject, as it involves so many principles and concepts that are difficult to memorize. Those student who opt for science have to face many challenges and work hard to get good marks in the exam. In this lesson, students will learn about Electromagnetic Induction. The best solution of the problem is to practice as many Physics Class 12 Chapter 6 Important Questions as possible to clear the doubts. 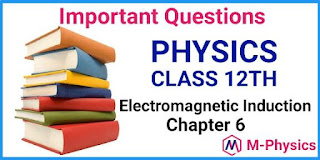 3 Q:- Why is induced EMF referred to as the back EMF?
Ans:- Because induced EMF tends to oppose the change in flux for change in current flowing in a circuit.

7 Q:- What is motional EMF?
Ans:- Setting up of an induced EMF whenever a conductor or a coil is moved in a normal, uniform magnetic field. Kn motional EMF, magnetic flux changes due to change in effective area of a circuit exposed to the magnet field.

10 Q:- A closed loop is held stationary in the magnetic field between the North and South poles of two permanent magnets held fixed. Can be hope to generate current in the loop by using very strong magnets?
Ans:- No,we cannot hope to generate current in the loop even by using strong magnets because the loop as well as magnets are held fixed. Hence, magnetic flux linked with the loop remains constant and there is no change in magnetic flux. As a result, no induced EMF of current occurs.

17 Q:- If the number of turns of a solenoid is doubled, keeping the other factors constant how does the self inductance of the coil change?
Ans:- The self inductance will becomes 4 times of its original value if all over factors remain unchanged. It is because L ∝ N2.

18 Q:- Define mutual induction.
Ans:- Mutual induction is the phenomenon according to which a back EMF is induced in a coil as a result of change in the current flowing in a neighbouring coil.

22 Q:- From where does the energy for induced current come from?
Ans:- The electrical energy due to productions of induced EMF for current comes at the expense of an equal amount of mechanical energy. When a magnet is brought towards a coil or a coil is rotated in a uniform magnetic field or a conductor road is moved in a uniform magnetic field, etc., some mechanical work has to be done on the magnetic or coil or conductor rod, etc. As a result of this, mechanical work done, an electrical emf current is induced.

25 Q:- An iron ball falling vertically through the hollow region of a thick cylindrical shell made of copper experiences a retarding force. What can you conclude about the iron bar? Give reason.
Ans:- The iron bar must be a magnet. When this magnetized iron bar falls through the copper cylindrical sell, it causes a change in magnetic flux linked with the shell and consequently, Eddy Currents are set up in the shell. These eddy currents oppose the motions of the iron bar. As a result, the iron bar experiences a retarding force.

26 Q:- A metallic pole falls down vertically in the plane of magnetic meridian. What is the EMF induced between its ends?
Ans:- No EMF is induced between the ends of the metallic pole. We know that no motional EMF is produced when any two out of B, v and l are parallel to each other. In present question, no external magnetic field is present and induced EMF can be produced only due to the Earth's magnetic field. However, vertical component (Bv) of the earth's magnetic field is parallel to velocity velocity v and horizontal component (BH) is parallel to the length l of the pole. Hence, neither of the two can produce induced EMF in the pole.

28 Q:- Two metallic wheels of same size but one having eight spokes while the other having 12 spokes are rotated in a uniform normal magnetic field B with same angular speed ω. In which wheel, more emf will be produced between the axle and the rim of the wheel, and why?
Ans:- In both wheels, same emf will be produced between the axle and Rim of the wheel. It is because various spokes in a wheel are connected in parallel and net EMF remains same as due to single spoke only.

29 Q:- Generally, a mild Spark is produced in the switch off an electrical fan when it is put off. explained why?
Ans:- The armature coil of the motor of an electric fan has a high value of self inductance (L). When the fan is switched off, electric current flowing through armature and consequently, magnetic flux linked with the armature coil suddenly falls. As a result of this change in magnetic flux, an EMF is generated across the ends of the coil, which causes a mild Spark in the air gap of switch.

31 Q:- Two identical coaxial circular loops carry equal currents circulating in the same direction. What will happen to current in each loop if the loops approach each other?
Ans:- As two coaxial circular loop carry equal currents circulating in the same direction, magnetic fields due to these currents are in same sense and are added up. As the loops approaches each other, the field and hence flux linked with each loop increases. So, in accordance with the Lenz's law, the induced current developed in each loop tries to decrease the magnetic flux. It means that the induced current in each loop will be opposite to the initial current flowing through it. As a result, the current in each loop will decrease as the loop approach each other.