Can we design an aeroplane which is very light but sufficiently strong? Can we design an artificial limb which is lighter but stronger? Why does a railway track have a particular shape like I? Why is glass brittle while brass is not?

In this chapter, we will introduce the concepts of stress, strain and elastic modulus and a simple principle called Hooke’s law that help us predict what deformation will occur when forces are applied to a real kind of body. 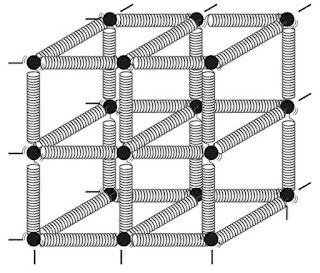 When the deforming force is removed, the interatomic forces tend to drive them back to their original position. Thus the body regains its original shape and size.

If a force applied on a body produces a change in the normal positions of the molecules of the body, it is called deforming force.

The property of the body due to which, it tries to regain its original configuration when the deforming forces are removed is called elasticity.

When a deforming force is applied to a body to change its shape, the body develops an opposing force due to its elasticity. This opposing force tries to restore the original shape of the body, it is called restoring force.

The strain is the relative change in dimensions of a body resulting from the external forces.

It is a fractional quantity so, it has no unit.

The tensile strain of the object is equal to the fractional change in length, which is the ratio of the elongation Δl to the original length l.

We define shear strain as the ratio of the displacement x to the transverse dimension L.

The fractional change in volume that is, the ratio of the volume change ΔV to the original volume V is called Bulk Strain.

The restoring force developed per unit area in a body is called stress.

In SI system, stress is measured in N / m² (pascal) and in CGS system in dyne/cm². The dimensional formula for stress is [M L–1T–2]

We define the shear stress as the force F|| acting tangent to the surface, divided by the area A on which it acts.

For small deformations the stress and strain are proportional to each other. This is known as Hooke’s law.

where k is the proportionality constant and is known as modulus of elasticity.

The ratio of stress and strain, called modulus of elasticity, is found to be a characteristic of the material.

For a sufficiently small tensile stress, stress and strain are proportional. The corresponding elastic modulus is called Young’s modulus, denoted by Y.

If the forces are small enough that Hooke’s law is obeyed, the shear strain is proportional to the shear stress. The corresponding elastic modulus is called the shear modulus, denoted by G. It is also called the modulus of rigidity.

SI unit of shear modulus is Nm–2 or Pa.

When Hooke’s law is obeyed, an increase in Bulk stress produces a proportional Bulk strain. The corresponding elastic modulus (ratio of stress to strain) is called the Bulk modulus, denoted by B.

When the pressure on a body changes by a small amount Δp, from p to (p+Δp), and the resulting Bulk strain is ΔV/V, Hooke’s law takes the form

We include a minus sign in this equation because an increase of pressure always causes a decrease in volume. The Bulk modulus B itself is a positive quantity.

SI unit of bulk modulus is Nm–2 or Pa.

The reciprocal of the Bulk modulus is called the compressibility and is denoted by K. From equation

The units of compressibility are those of reciprocal pressure, Pa–1 or atm–1.

The excess of the energy of interaction between all atoms/molecules of a deformed object is elastic energy. When we remove the external force the body becomes undeformed and the elastic energy, will be retrieved back and converted into vibrational energy followed by heat, light, sound etc.

When a body is linearly extended, it contracts in the direction at right angles. Poisson’s ratio, σ is the ratio of the lateral strain to the longitudinal strain.

The Poisson’s ratio is given as,

–ve sign shows that if the length increases, then the radius of wire decreases. Poisson’s ratio is a unit less and dimensionless quantity.

Applications of Elastic Behaviour of Materials

In our daily life, most of the materials which we use, undergo some kind of stress. That is why, while designing a structure of the material we give due consideration to the possible stresses, the material might suffer at one stage or the other. The following examples illustrate this concept.