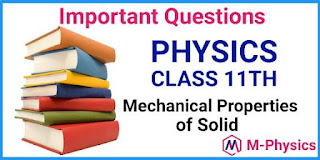 2 Q:- What is a deforming force?
Ans:- Deforming force is a force which tries to deform a body,i.e., which cause a change in shape or size (configuration) of a body.

4 Q:- Are inter atomic forces developed in a deformed body attractive or repulsive?
Ans:- Interatomic forces are attractive when a body is stressed and repulsive when the body is compressed.

7 Q:- Name the object which are the nearest approach to:

(a) perfectly elastic, and

9 Q:- The length of a wire is cut to have. What will be the effect on:

11 Q:- How can a material have more than one moduli of elasticity?
Ans:- For a given material there can be a different modulus of elasticity depending on the type of strain and stress.

12 Q:- Why is work to be done to stretch a wire? where does this work go?
Ans:- While stretching a wire, work is to be done against internal restoring forces developed in a body. The work done is stored in the body itself as its elastic potential energy (or strain energy).

13 Q:- What is an elastomer? Give an example.
Ans:- An elastomer is an elastic substance which can be subjected to large values of strain (even much more than 100%). Rubber is a very good example of elastomers.

14 Q:- What is the effect of temperature on elastic behaviour of materials? In why?
Ans:- A material becomes less elastic (i.e., values of moduli of elasticity become less) as the temperature is increased. It is because value of intra atomic distance increases slightly with increase in temperature and consequently, internal restoring forces become weak.

15 Q:- Which is more elastic, steel or rubber, and why?
Ans:- Steel is much more elastic than rubber. Moduli of elasticity is given by the ratio of stress to the strain. For longitudinal strain, young modulus,

16 Q:- A wire is cut to half its original length.what effect would it have on the maximum load that can be supported by the wire now?
Ans:- there will be no effect and even now, the wire can support the same value of maximum load. It is because maximum load = yield strength × cross sectional area of the wire and does not depend on the length of the wire.

17 Q:- If we double the diameter of a steel rope, what will be the effect on the breaking stress, breaking force for the rope?
Ans:- If diameter (or radius) of a steel rope is doubled, its cross sectional area increases to 4 times of its original value and hence breaking force (or breaking load) will also become four times of its previous value However,breaking stress is the force per unit area and it depends only on the material of the rope. Hence, it remains unchanged.

20 Q:- Are internal restoring forces developed in a body due to elasticity property,conservative or nonconservative?
Ans:- Internal restoring forces developed due to elasticity are conservative forces so long as a stress-strain curves for loading and unloading are identical (as for a metal within elastic limit). however, the forces are non conservative in nature for a material which stress-strain curves for a loading and unloading are different as for an elastomer).

21 Q:- Read the following statement given below carefully and state with reason, if it is true or false : A piece of rubber under an ordinary stress can display even 1000% strain and yet it returns to its original length when unloaded. It means that there is much more elastic than Steel.
Ans:- No, the statement is not correct. although rubber piece can undergo a large strain and yet I regain its original dimension but as here, slope of stress-strain curve is comparatively much smaller than that for steel, rubber is less elastic .again, yield strength of rubber is much less than that of Steel.

Q 22:- A heavy wire is suspended freely with one end of wire fixed. Is it under some (a) stress, and (b) strain?
Ans:- Yes, the wire is under stress due to its own weight which is effectively acting at its centre of gravity. Accordingly, some longitudinal tensile strain too will also be present in the wire.

Q 23:- Springs used in automobiles as shockers are prepared for steel not copper. Why?
Ans:- Because moduli of elasticity of Steel are more than that of copper. As a result, for a given force, less strain will be produced in a steel spring and action of Steel spring will be better.

Q 25:- Steel ropes used in suspension bridges, cranes and lifts, etc., are made of a number of thin wires braided together. Why?
Ans:- In suspension bridges, cranes and lifts depending upon load and margin of safety thick Steel ropes (radius 2-3 cm) are used. A single steel wire of such dimension will be a rigid rod. So, the rupees are always made up of a number of thin wire braided together for ease in manufacture, flexibility and strength.