It is important for the students that all the concepts should be very clear for better marks in future. Here, we are providing important conceptual questions and answers for class 11 physics chapter 8 Gravitation. In this lesson, students will learn about Gravitation. This will not only help the students to know the important questions but will also help them during revision. 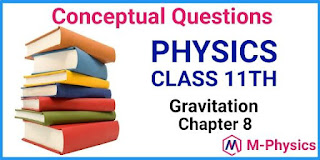 Q.2. Which is greater, the attraction of the earth for 1 kg of iron or attraction of 1 kg iron for the earth? Why?
Ans. In accordance with Newton's law of gravitation, the force is equal in the two cases. It is because, when the two bodies interact due to their masses (gravitational interaction) they accept equal forces on each other but an opposite directions.

Q.4. Why is G called universal constant of gravitation?
Ans. It is because the value of G is independent of the two objects taking part in gravitational interaction.

Q.5. What is the nature of motion of an object falling freely under the action of gravity?
Ans. Uniformly accelerated motion in one dimension.

Q.6. What is the acceleration of a particle projected upward at its highest point of motion?
Ans. 9.8 ms-2 (vertically downwards).

Q.18. Among the known types of forces in nature, the gravitational force is the weakest. Why then does it play a dominant rule for motion of bodies on the terrestrial astronomical and cosmological scale?
Ans. The nuclear forces are short range forces. Such forces are effective only over a small distance of the order of 1015 to 1014 m. On the other hand, electrical forces are long range forces but such forces can be both attractive as well as repulsive. Therefore, nuclear forces and electrical forces do not play any role for the motion of the massive neutral bodies on the terrestrial, astronomical and cosmological scale. It is due to this reason that the gravitational force (which is always attractive though weakest) plays dominant role for the motion of such bodies.

The effect will not be same at all places. It will be maximum at the equator.

(1) Law of orbit:- Each planet revolves around the sun in an elliptical orbit, with the sun at one focus of the elliptical path.

(2) Law of area:- The position vector of the planet from the sun i.e. the line joining the planet to the sun sweeps out equal areas in equal times i.e. the areal velocity of a planet around the sun always remains constant.

(3) Law of periods:- The square of the period of any planet about the sun is proportional to the cube of the semi-major axis of the elliptical path.

i.e. acceleration due to gravity is directly proportional to the mass of the planet.

Q.31. Can gravitational potential have positive value?
Ans. No, it is always negative.

Q.33. An elephant and an ant are to be projected out of the gravitational pull of the earth. Do we need different velocity is to achieve so?
Ans. No, the same velocity is needed in the two cases. It is because, the escape velocity does not depend upon the mass of the object to be projected.

Q.35. Name two factors which determine whether a planet has an atmosphere or not.
Ans. (1) Acceleration due to gravity.

(2) The surface temperature of the planet.

Q.40. Briefly explain, why there is practically no atmosphere on the surface of the moon.
Ans. Due to low value of acceleration due to gravity the escape velocity on the moon is quite small. It can be shown that the values of r.m.s. velocity of the molecules of different gases is much above the value of the escape velocity on the moon. As a result, all the gases have escaped the surface of moon with the passage of time.

Q.41. Why does the atmosphere of Jupiter contain light gases (mostly hydrogen), whereas the earth atmosphere has little of hydrogen gas?
Ans. The escape velocity on Jupiter is so large that even light gases cannot escape.

Q.42. What is escape velocity?
Ans. The minimum velocity with which a body must be projected up so as to enable it to just overcome the gravitational pull, is known as escape velocity.

Q.46. Does the orbital velocity of a satellite depend upon its mass?
Ans. No, it is independent of the mass of the satellite.

Q.47. What is the time period and radius of the moons orbit around the earth?
Ans. Time period = 27.3 days

Q.49. What are the signs of kinetic energy, potential energy and the total energy of a satellite revolving around the earth?
Ans. Kinetic energy : positive,

(2) They are used for weather forecasting.

(2) they are also used for various military purposes, such as to keep an eye on the moment of ships, troops and vehicles. They are also employed for spying and surveillance.

Q.58. What is weightlessness?
Ans. The apparent loss in weight of a body, when it falls freely under gravity is called weightlessness.

Q.59. Why an astronaut in an orbiting spacecraft is not in zero gravity although weightless?
Ans. At any point on the orbit of the spacecraft, there is some value of the acceleration due to gravity. However, its weight is used up in providing the necessary centripetal force for the orbital motion.

Q.61. The earth is acted upon by the gravitational attraction of the sun. Why does not the earth fall into the sun?
Ans. The earth does not fall into the sun due to its stable orbit around the Sun. The gravitational pull of the sun provides the necessary centripetal force to the earth, so as to make it revolve in a stable orbit. We may say that the Earth is falling freely towards the sun but always missing it.

Q.62. The artificial satellite does not have any fuel, but even then it remains orbiting around the earth. why? Explain.
Ans. The gravitational pull due to Earth provides the necessary centripetal force to the satellite to make it go around the earth. As such no fuel is required.

Q.66. What are the necessary conditions for a satellite to appear stationary?
Ans. (1) It should revolve in an orbit coplanar and concentric with the equatorial plane.

(2) the sense of its orbital motion should be same as that of the rotational motion of earth i.e. in anticlockwise direction.

(3) its time period should be exactly 24 hours.

Q.67. What is the difference between ordinary and geostationary satellite?
Ans. A satellite, put in a circular orbit concentric and coplanar with equatorial plane of the earth and at a height, such that its period of revolution is just 24 hours is called a stationary satellite. The calculations shows that the height of the orbit of such a satellite should be about 36,000 km. Such a satellite always stays over the same place on the surface of earth and hence appears stationary. As ordinary satellite has time period other than 24 hours and hence appears to be moving one, place it in a desired orbit and allow it to make a soft landing.

Q.68. What is retorocket and its function?
Ans. A retorocket is a rocket engine, which works on the reaction principle. On being fired, it produces thrust in a direction opposite to the direction of firing. A spacecraft is always provided with retorockets. A retorocket is used to change the speed of the spacecraft, separate it from another one, place it in a desired orbit or allow it to make a soft landing.

Q.73. A person sitting in an artificial satellite of earth feels weightlessness, but a person standing on the moon has weight, do the moon is also a satellite of Earth?
Ans. It is the gravitational pull of the Earth on a person in the satellite, which provides him the necessary centripetal force to revolve around the earth and hence he experiences weightlessness. Had the size (weight) of the artificial satellite been very large (as in case of the moon), a person will be conscious of his weight in the satellite. Therefore, a person standing on the moon, has weight due to the additional gravitational pull of the moon on him.

Q.79. What is weightlessness?
Ans. The apparent loss in weight of a body when it falls freely under gravity, is called weightlessness.