Q.1. What is physics? Ans. Physics is the branch of science dealing with the nature and natural phenomena. Q.2. What is the basic difference between

It is important for the students that all the concepts should be very clear for better marks in future. Here, we are providing important conceptual questions and answers for class 11 physics chapter 1 physical world. In this lesson, students will learn about Physical World. This will not only help the students to know the important questions but will also help them during revision. 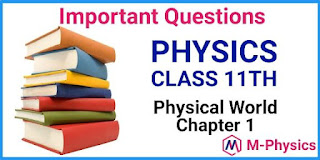 Q.1. What is physics?
Ans. Physics is the branch of science dealing with the nature and natural phenomena.

Q.2. What is the basic difference between science and technology?
Ans. Science is the study of laws of nature while technology is the application of these laws in practical situation.

Q.3. What is the scientific principle on which rocket propulsion is based?
Ans. Newton's second and third laws of motion.

Q.4. Name the principle on which a nuclear reactor works.
Ans. Nuclear fission.

Q.5. What is the scientific principle which forms the basis of heat engine and refrigerator?
Ans. Laws of thermodynamics.

Q.9. What is gravitational force?
Ans. It is the force of attraction between two objects due to their masses.

Q.10. What is electromagnetic force?
Ans. It is the force of attraction or repulsion between two electric charges in motion.

Q.11. What is nuclear force?
Ans. The force between protons and neutrons inside the nucleus is called nuclear force.

Q.12. State law of conservation of linear momentum.
Ans. It states that if no external force acts on a system, the linear momentum of the system remains constant.

Q.13. State law of conservation of angular momentum.
Ans. It states that if no external torque acts on a system, then the total angular momentum of the system always remains constant.

Q.14. State law of conservation of energy.
Ans. It states that energy can neither be created nor destroyed, however, it may change from one form to another.

Q.16. Discuss relation of physics to chemistry.
Ans. The study of structure of atom, radioactivity, xray diffraction etc. has brought about a revolution in the present century chemistry. These studies have led to the rearrangement of elements in the periodic table, to detect even traces of substances in a sample, to know the nature of valency and chemical bonding and to understand the complex chemical structure.

Q.17. Explain in brief the relation of physics to biological sciences.
Ans. The life sciences have also been benefited by the advancements in physics. Optical microscope is found to be of immense used in the study of biology. The electron microscope has made it possible to see even the structure of a cell. The X-ray and the neutron diffraction have helped in understanding the structure of nucleic acids, which have helped to control the vital processes on the life activity.

Q.18. Name two advancements made in technology on the basis of physics.
Ans.

Q.19. List some key contemporary areas of science and technology, which are responsible for the present industrial revolution.
Ans.

Q.20. What is mechanics?
Ans. Mechanics is the theory of motion of material objects at low speeds.

Q.21. What is thermodynamics?
Ans. Thermodynamics is the theory of heat, temperature and the behaviour of a system of a large number of particles.

Q.23. What is relativity?
Ans. Relativity is the theory of invariance in nature and the theory covering the motion of high speed moving particles.

Q.26. Who discovered the law of photoelectricity?
Ans. Albert Einstein.

Q.30. Name the scientist who discovered the structure and evolution of stars.
Ans. S. Chandrasekhar.

Q.38. Name the principle on which radio and television works.
Ans. Propagation of electromagnetic waves.

Q.39. What is the scientific principle on which Sonar works?
Ans. Reflection of ultrasonic waves.