Science is a complex and challenging subject, as it involves so many principles and concepts that are difficult to memorize. Those student who opt for science have to face many challenges and work hard to get good marks in the exam. In this lesson, students will learn about Electrostatic Potential and Capacitance. The best solution of the problem is to practice as many Physics Class 12 Chapter 2 Important Questions as possible to clear the doubts. 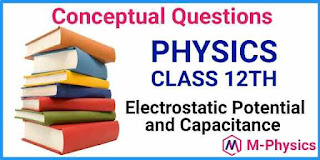 Q 2:- A positive charge +Q is located at a point. What is the work done,if a unit positive test charge is carried once around this charge along a circle of radius r about this point?
Ans:- Work done is zero because electrostatic field is a conservation field and work done against a conservation force is zero for a close path in which initial and positions are the same.

Q 5:- A charge conductor 'A' is placed on an insulating stand. An uncharged conductor B is brought close to A, as shown in the following figure. How will the charge and potential of conductor A will change?
Ans:- When an uncharged conductor B is bought close to A, equal and opposite charge are induced on B as shown in the figure. The total charge of a conductor remains unchanged but due to presence of induced charges in its neighbourhood, electrostatic potential of a conductor 'A' decreases from its original value.

Where `\hat{n}` is a unit vector drawn normally outward at a point on the surface of a charged conductor.

Q 23:- Why is a parallel plates capacitor named so?
Ans:- Because the two plates of a capacitor are exactly parallel to each other, i.e., separation between them is same at all points.

The value of potential remains unaltered even if the charge is distributed unevenly on the ring.

Q 35:- If the two plates of a charged capacitor be suddenly connected to each other by a thin metal wire, what will happen?
Ans:- The capacitor will be immediately discharged and electrostatic potential energy stored in the capacitor will be released producing heat and sometimes a spark too.

Q 36:- What is the basic use of a capacitor?
Ans:- A capacitor is used to store large amount of electric charge or energy event at a low potential.

Q 40:- We have two copper spheres, each of radius R, but one sphere is solid and the other is hollow. Which sphere has higher capacitance, and why?
Ans:- Capacitance of both the sphere is exactly equal having a value, C = 4πε0R.

Q 48:- Why the Van de Graaff generator is enclosed inside an earth connected steel tank filled with air under pressure?
Ans:- It prevents the leakage of charge due to ionization. The reason is that in air under pressure, as soon as free ions are produced, they recombined to form neutral air molecules.