An integrated circuit (IC) is a small Silicon semiconductor crystal called a chip, containing the electronic components for the digital gates. The various gates are interconnected inside the chip to form the required circuit. The chip is mounted in a ceramic or plastic container and connections are welded by thin gold wires to external pins to form the Integrated circuit. each IC has memory designation printed on the surface of the package for identification. 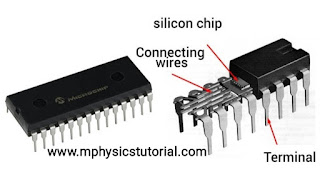 ICs can be classified on the basis of their chip size as given below :

SSI devices contain several independent gates in a single package. The inputs and outputs of the gates are connected directly to the pins in the package. The number of gates is usually less than 10 and is limited by the number of pins available in the IC.

MSI devices have a complexity of approximately 10 to 200 gates in a single package. They usually perform specific complementary digital function as decoders, adders and registers.

LSI devices contain between 200 and a few thousand gates in a single package. They include digital systems such as processor's memory chips and Programmable modules.

VLSI devices contain thousands of gates with a single package. VLSI devices have revolutionized the computer systems design technology, giving designers the capability to create structures that previously were not economical.

In the Monolithic IC the entire circuit is built into single piece of semiconductor chip, which consists of active and passive components. The most commonly used integrated circuits are microprocessors, memories etc.

With basic components like register, diode and transistor are basic circuit is first made. The basic structures of a Monolithic IC will have four Layer of different materials. The base layer will be a p-type Silicon layer and is named as the substrate layer. This layer will have a typical thickness of 200 micrometer. Silicon is the preferred semiconductor for the p-type and n-type layer because of its favorable characteristics for the manufacturing of an IC.

All the active and passive components required for the circuit are fabricated into this layer. This layer has a typical thickness of 25 micrometer. The n-type Silicon material is grown as a single crystal extensions of the p-layer and the components are required are fabricated using series of p-type and n-type impurity diffusion. The n-type layer becomes the collector for the transistor or an element for a diode or a capacitor.

The layer above n-type is made of silicon diode dioxide material. Since there is a selective p-type and n-type impurity diffusion going on in the second layer is clear acts as a barrier in the process. The rest of the wafer remains protected against diffusion. This layer also protects the silicon layer from contamination.

The up-most layer is that made of aluminium. This metallic layer is used to provide internal connections between the different components used in the IC.

In this section we shall now see how various circuit elements like diode, transistor, registers and capacitors are fabricated into an IC.

Next pure oxygen is passed over the wafer to form complete SiO2 layer. A hall is then etched at the center of this layer, thus exposing the n-epitaxial layer. This hall in SiO2 layer is called a window. Now we pass trivalent atoms through the window. The trivalent atoms diffuse into the epitaxial layer to form an island of p-type material as shown in figure. The last step is to attach the terminals. Thus a P-N junction diode is formed on the substrate.

Transistors are formed by using the same principles as for diodes. A window is now formed at the center of SiO2 layer, thus exposing the p-epitaxial layer. Then we pass pentavalent atoms through the window. The pentavalent atoms diffuse into the epitaxial layer to form and island of an n-type material. The SiO2 layer is reformed over the wafer by passing pure oxygen. The terminals are processed by etching the SiO2 layer at appropriate locations and depositing the metal at these locations. In this way, we get the integrated transistor. 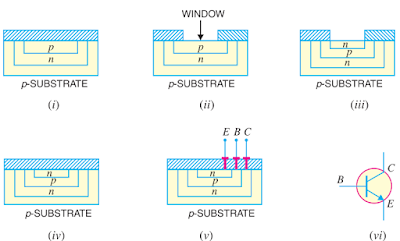 A resistor is formed on a portions of the substrate of a Monolithic IC. For this purpose, the steps for fabricating diode are carried out up to the point where and island has been form and sealed off. A window is now formed at the center of SiO2 layer, thus exposing the n-epitaxial layer. Then we diffuse a p-type material into the n-type area. The SiO2 layer is reformed over the wafer by passing pure oxygen. The terminals of processed etching SiO2 layer at two points about the p island and depositing the metals at these locations. In this way, we get an integrated resistor. 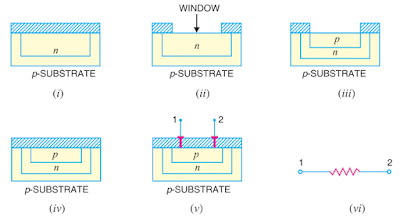 Figure shows the process of fabricating a capacitor in the Monolithic IC. The first step is to diffuse an n-type material into the substrate which forms one plate of the capacitor. Then SiO2 layer is reformed over the wafer by passing pure oxygen as shown in figure.