Science is a complex and challenging subject, as it involves so many principles and concepts that are difficult to memorize. Those student who opt for science have to face many challenges and work hard to get good marks in the exam. In this lesson, students will learn about Current Electricity. The best solution of the problem is to practice as many Physics Class 12 Chapter 3 Important Questions as possible to clear the doubts. 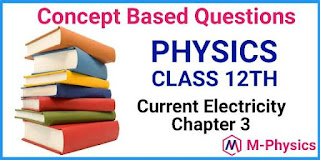 Q 3:- A steady current passes through a metallic wire . Is there an electric field inside the conductor?
Ans:- Yes, a steady electric field is present along the length of a metallic wire when a steady current flows through it. A current will flow only when a potential difference V = V1-V2 is maintained between the two ends of a wire. If L be the length of the wire, then an electric field E = V/L is present inside the conducting wire parallel to its length.

Q 4:- What do you understand by the emf of a cell? Is it a force or energy?
Ans:- The emf of a cell is the amount of energy supplied by the cell for flow of unit positive charge once round the entire circuit, both outside as well as inside the cell. Alternately, it is equal to potential difference between the terminal of a cell, when the cell is in an open circuit, i.e., when no current is being drawn from the cell. The emf of a source is not a force, but it is an energy.

Q 8:- A wire of resistivity ρ is stretched so as to double its length. What will be its new resistivity?
Ans:- The resistivity remains unchanged as ρ because resistivity depends only on the material of wire and temperature but is independent of its length and cross-section area.

Q 9:- When do we say that Ohm's law is being followed by a substance?
Ans:- A substance is said to follow Ohm's law if its resistance is independent of the magnitude and polarity of the applied potential difference at a given temperature.

Q 14:- Name two important parameters of a material which determine its resistivity.
Ans:- The resistivity of the material of a conductor is mainly determined by (a) the number density of electrons (n), and (b) the relaxation time (τ), i.e., the mean time between two successive collisions of an electron.

Q 15:- What is the relation between conductance and resistance?
Ans:- The conductance (G) of a substance is reciprocal of its resistance (R), i.e.,

Q 23:- Of which material, is a potentiometer wire normally made, and why?
Ans:- Potentiometer wire is generally made of alloys like manganin or constantan because resistivity of these alloys is comparatively high and temperature coefficients of resistivity are extremely small and negligible.

Q 26:- The electron drift arises due to the force experienced by electrons in the electric field inside the conductor. But force should cause acceleration. Why then do the electrons acquire a steady average drift speed?
Ans:- Under the influence of force due to electric field, electrons are accelerated increasing their drift speed until they collide with positive ions or atoms of the metal. Electrons lose their drift speed after collision, but are again accelerated and so on. Therefore, on an average, electrons acquire only a steady average drift Speed.

Q 28:- Why is there no electric current through a metallic conductor under normal conditions when it possesses a large number of free electrons?
Ans:- Under normal condition, free electrons inside a metallic conductor move randomly with different speeds in different directions so that net average velocity of electrons is zero. As there is no definite drift motion of electrons in a particular direction, no electric current flows through the conductor unless some external electric field is applied across it.

Q 30:- A piece of aluminium and another of germanium are cooled from 300 K to 100 K. What will be the effect on their conductivities, and why?
Ans:- We know that aluminium is a good conductor. As its temperature is lowered, its resistivity decreases and consequently, conductivity rises. On the other hand, germanium is a typical semiconductor. As its temperature is lowered, its resistivity increases and conductivity decreases. So, on cooling from 300 K to 100 K, electrical conductivity of aluminium increase but that of germanium decreases.

Q 31:- Why is Wheatstone bridge arrangement called a bridge?
Ans:- In Wheatstone arrangement, four resistances P, Q, R and S form a quadrilateral and both cell and the galvanometer are joined between diagonally opposite junctions of that quadrilateral. Hence, it is known as a bridge.

Q 33:- In a meter bridge experiment, why is it considered important to obtain the balance point near the mid-point of bridge wire?
Ans:- The sensitivity of a Wheatatone bridge is maximum when all the four resistance P, Q, R and S are equal or nearly equal. For this purpose, we consider it important that the null point is obtained near the mid-point of bridge wire so that lengths l and (100-l) and consequently, their resistance P and Q are almost equal.

Q 36:- The electron drift speed is estimated to be only a few mm/s for currents in the range of a few amperes. How then is current established almost the instant a circuit is closed?
Ans:- As soon as a circuit is closed, an electric field is established throughout the circuit almost instantly causing at every point a local electron drift. Establishment of a current does not have to wait for electrons from one end of conductor to travel up the other end.

Q 37:- Two heating coils, one of fine wire and other of thick wire, made of same material and same length are connected one by one to a source of electricity. Which one of the two coils will dissipate electric power at a greater rate?
Ans:- When a heating coil of residence R is connected to a source of electricity of voltage V, the power dissipated,

As thicker wire has less resistance than a thin wire, power dissipated in thicker wire will be more than in a fine wire.

Q 42:- It is easier to start a car engine on a warm day than on a chilly day. Why?
Ans:- On a warm day, room temperature is higher and with rise in temperature, the internal resistance of car battery decreases. As a result, car battery can provide a greater current and car engine will start easily.

Q 43:- Light from a bathroom bulb gets dimmer for a moment when the geyser is switched on. Explain why?
Ans:- When the geyser is switched on, it draws a large current. Although light bulb and geyser are in parallel, but for a moment, voltage of the circuit is lowered on account of large current drawn by geyser. Consequently, the bathroom bulb gets dimmer. However, within a short time, the voltage is stabilised by the transmission grid and so, the bulb starts glowing fully at its normal rate.