Limitations, In 1912, Rutherford proposed his nuclear model of the atom. It is also known as Rutherford's planetary model of atom.

In 1912, Rutherford proposed his nuclear model of the atom. It is also known as Rutherford's planetary model of atom. Salient features of Rutherford's atom model are as follows :

Rutherford's nuclear model of atom was a major step towards the modern picture of the atom. However, it suffered with the following limitations : 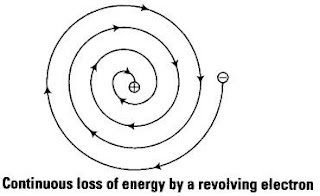 From the above points, it is clear that Rutherford's model tells only a part of the story and classical ideas are not sufficient to explain the atomic structure.