Q 1:- What is photoelectric effect? What are photoelectrons? Ans:- The phenomenon of emission of electrons from the surface of a metal, when radiation

Science is a complex and challenging subject, as it involves so many principles and concepts that are difficult to memorize. Those student who opt for science have to face many challenges and work hard to get good marks in the exam. In this lesson, students will learn about Dual Nature of Matter and Radiation. The best solution of the problem is to practice as many Physics Class 12 Chapter 11 Important Questions as possible to clear the doubts. 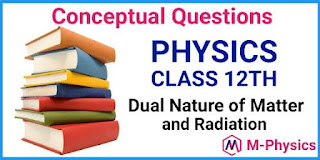 Q 7:- Is photoelectric emission from the surface of a given metal possible at all frequencies/ wavelengths? Give reason for your answer.
Ans:- No, photoelectron emission is not possible for all frequencies/wavelengths of incident radiation on a metal surface. For causing photoelectric emission, the energy of incident radiation photon must be at least equal to the work function of the given metal.

Q 9:- How does the maximum kinetic energy of electrons emitted from a metal vary with its work function?
Ans:- For radiation of a given high frequency incident on a metal surface, the maximum kinetic energy of emitted photoelectrons is less if work function of metal is high and vice versa. It is in accordance with Einstein's photoelectric equation hv = ф0 + Kmax

Q 13:- Two monochromatic radiations, blue and violet, of the same intensity, are incident on a photosensitive surface and cause photoelectric emission. Would: (a) the number of electrons emitted per second, and (b) the maximum kinetic energy of the electrons, be equal in the two cases. Justify your answer.
Ans:-

Q 15:- Electrons are emitted by a photosensitive surface when it is illuminated by green light but no emission takes place by yellow light. Will the electrons be emitted when the surface is illuminated by (a) red light, and (b) blue light?
Ans:- We know that for constituent colours of white light, the frequency gradually increases from red side to blue-violet side. As the given photosensitive material allows electron emission for green light but not for yellow light, the threshold frequency lies in green region.

Q 16:- Every metal has a definite work function. If incident radiation is monochromatic, then why do all the photoelectrons not come out with the same energy?
Ans:- Because of the energy distribution of free electrons in a metal, the energy required to eject an electon from the metal surface is different for different electrons. Work function of a metal is the least energy required by an electron to come out of the metal. Thus, although incident light is monochromatic (of same frequency and hence energy), the ejected photoelectrons have different values of kinetic energy.

(b) While studying the variation of the intensity of the scattered electrons with angle of scattering, Davisson and Germer observed a sharp peak for a certain angle. It was on account of constructive interference of electrons scattered from different layers of lattice of the crystal. From the electron diffraction experiment, the wavelength of electron waves was measured, which was found to be in an excellent agreement with de Broglie's theoretical value. Thus, the experiment confirmed the de Broglie relation.