The cyclotron is a machine to accelerate charged particles or ions to high energies. The cyclotron uses both electric and magnetic fields 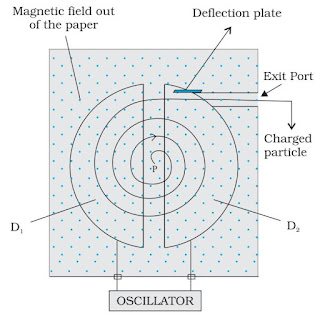 Cyclotron uses the fact that the frequency of revolution of the charged particle in a magnetic field is independent of its energy and speed. The particles move most of the time inside two semicircular disc like metal containers, D1 and D2, which are called dees as they look like the letter D. Figure shows a schematic view of the cyclotron. Inside the metal boxes the particle is shielded and is not acted on by the electric field. The magnetic field, however, acts on the particle and makes it go round in a circular path inside a dee. Every time the particle moves from one dee to another it is acted upon by the electric field. The sign of the electric field is changed alternately in tune with the circular motion of the particle.

The whole assembly is evacuated to minimize collisions between the ions and the air molecules. A high frequency alternating voltage is applied to the dees. In the sketch shown in figure, positive ions or positively charged particles (e.g., protons) are released at the centre P. They move in a semicircular path in one of the dees and arrive in the gap between the dees in a time interval T/2; where T is the period of revolution, given by

This frequency is called the cyclotron frequency for obvious reasons and is denoted by fc.

The frequency fa of the applied voltage is adjusted so that the polarity of the dees is reversed in the same time that it takes the ions to complete one half of the revolution. The requirement fa = fc is called the resonance condition. The phase of the supply is adjusted so that when the positive ions arrive at the edge of D1, then D2 is at a lower potential and the ions are accelerated across the gap. Inside the dees the particles travel in a region free from the electric field.

The increase in their kinetic energy is qV each time they move from one dee to another. As radius is directly proportional to speed, the radius of their path goes on increasing each time their kinetic energy increases. The ions are repeatedly accelerated across the dees until they have the required energy to have a radius approximately that of the dees. They are then deflected by a magnetic field and leave the system via an exit slit. We have

where R is radius of the trajectory at exit, and equals the radius of a dee.

Hence, kinetic energy of the ions is,

The operation of a cyclotron is based on the fact that the time for one revolution of an ion is independent of its speed or radius of its orbit.