Q.1. What is centre of mass of a system of particles? Ans. The point in the system, where the whole mass of the system can be supposed to be concent

It is important for the students that all the concepts should be very clear for better marks in future. Here, we are providing important conceptual questions and answers for class 11 physics chapter 7 System of particles and Rotational Motion. In this lesson, students will learn about System of particles and Rotational Motion. This will not only help the students to know the important questions but will also help them during revision. 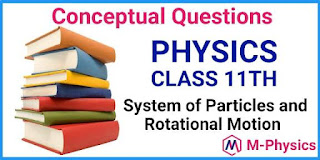 Q.3. Is centre of mass a reality?
Ans. No. It is only a mathematical concept.

Q.6. Where does the centre of mass of a rectangle lie?
Ans. At the point of intersection of the diagonals of the rectangle.

Q.12. What is the position of centre of mass in case of a (i) uniform rod, (ii) cylindrical body, (iii) conical body, (iv) circular ring?
Ans.

Q.19. What do you mean by a rigid body?
Ans. A body whose constituent particles remain at their respective positions, when a body is in translational or rotational motion is called a rigid body.

The SI unit of angular momentum is kg m2s-1.

Q.26. Explain, why it is difficult to open a door by pushing or pulling it near the hinge.
Ans. To open a door, torque has to be applied. Since

the torque is lesser, when force is applied on the door near the hinges. As a result, it proves difficult to open the door.

Q.27. Torque and work are both defined as force times distance. Explain, how do the differ?
Ans. (i) Whereas work is a scalar quantity, torque is a vector quantity. (ii) Work done is measured as the product of the applied force and the distance, which the body covers along the direction of the force. On the other hand, torque is measured as the product of the force and its perpendicular distance from the axis of rotation.

Q.32. Define couple.
Ans. A couple is defined as the pair of two equal and unlike parallel forces acting on a rigid body along different lines of action. The turning effect of a couple is called moment of couple or torque exerted by the couple.

The moment of inertia is called rotational inertia for the reason that it gives the measure of inertia of a body during its rotational motion.

Q.40. What are the factors on which the moment of inertia of a body depend?
Ans.

Q.42. Define radius of gyration.
Ans. It is defined as the distance from the axis of rotation at which, if whole mass of the body were supposed to be concentrated, the moment of inertia would be same as with the actual distribution of the mass of body in the form of the constituting particles.

Q.43. Is radius of gyration of a body constant quantity?
Ans. No, It changes with the change in the position of the axis of rotation.

If such a wheel gains or loses some rotational energy, it brings about only a very small change in its angular speed. In this way, a fly wheel helps to maintain uniform motion.

Q.49. How will you distinguish between a hard boiled egg and a raw egg by spinning each on a table top?
Ans. The egg which spins faster will be the hard boiled egg. It is because, a hard boiled will spin (rotate) more or less as a rigid body, where a raw egg will not do so. In case of a raw egg, its matter in the liquid state moves away from the axis of rotation, thereby increasing the moment of inertia. As M.I. of the raw egg is more, the acceleration produced will be lesser, when the same torque is applied in both the cases to set them spinning.

Q.50. The angular velocity of revolution of the earth around the sun increases, when it comes closer to the sun. Why?
Ans. The Earth revolves around the sun in elliptical orbit with the sun at one of the two focii of the elliptical orbit. Therefore, moment of inertia of the earth about an axis through the sun keeps on changing due to change in its distance from the sun. Since no external torque acts on the earth, its angular momentum must remain conserved. In order it remains so, the angular velocity of earth increases when the moment of inertia of earth decreases and vice versa.

Q.51. How does an ice-skater, a ballet dancer or an acrobat take advantage of the principle of conservation of angular momentum?
Ans. An ice skater, a ballet dancer or an acrobat is able to change his angular speed during the course of his performance. When the performer stretches out his hands and legs, his moment of inertia increases and the angular speed decreases. On the other hand, when he folds his hands and legs near his body, the moment of inertia decreases and he is able to increase his angular speed.