Q 1:- Define one tesla (1 T) of magnetic field. Ans:- Magnetic field is said to be one tesla if a unit positive charge moving in a direction perpendi

Science is a complex and challenging subject, as it involves so many principles and concepts that are difficult to memorize. Those student who opt for science have to face many challenges and work hard to get good marks in the exam. In this lesson, students will learn about Moving Charges and Magnetism. The best solution of the problem is to practice as many Physics Class 12 Chapter 4 Important Questions as possible to clear the doubts. 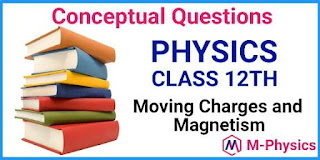 Q 9:- How does magnetic field at the centre of a circular coil carrying current depend on:

Ans:- Magnetic field developed at the centre of a circular coil carrying current:

Q 11:- Does the magnetic field produced at the centre of a solenoid coil, depend on

Ans:- Magnetic field at the centre of a current-carrying solenoid is given by B = μ0nI , where n is the turns per unit length, consequently, magnetic field B depends neither on the diameter nor or the total length of the solenoid.

Q 14:- What would be the path of a charged particle moving perpendicular to a uniform magnetic field?
Ans:- A circular path.

Q 18:- How does radius of the circular path traversed by a charged particle under the influence of a normal, uniform magnetic field depend on (a) its velocity and (b) its momentum, and (c) its kinetic energy?
Ans:- The radius r of the circular path of a charged particle of mass m and charge q under the influence of a normal magnetic field B depends on its speed v or momentum p or kinetic energy K.

As per the relation,

The time period is independent of the speed of the particle as well as the radius of the circular path.

Q 28:- Why are pole pieces of horse shoe magnet used in to moving coil galvanometer?
Ans:- Pole pieces of magnet are made concave so as to make the magnetic field radial.

Q 34:- What is magnetic moment associated with the orbital motion of a charge q moving in a circle of radius r with a constant speed v?
Ans:- The magnetic moment,

Q 35:- What is Bohr magneton? What is its value?
Ans:- Bohr magneton is the least possible value of magnetic moment associated with the orbital motion of an electron in an atom. Value of Bohr magnetor μB,

The charged particle goes undeflected i.e., does not experience any force only when `\vec{v}` and `\vec{B}` are either parallel or antiparallel.

Q 40:- An electron and a proton moving with the same speed enter the same magnetic field region at right angles to the direction of the field. For which of the two particles will the radius of circular path be smaller?
Ans:- From the relation, r = mv/qB, we know that all other factors remaining same r ∝ m. As out of electron and proton the mass of an electron is much less than of a proton, hence radius of circular path described by an electron is smaller.

Q 44:- When a charged particle moves in a magnetic field, its kinetic energy remains unchanged. Explain.
Ans:- The force on a moving charge,

is always perpendicular to `\hat{v}` and so the work done by the magnetic force is always zero. As a result, in accordance with work- kinetic energy principle, the kinetic energy of the charged particle remains unchanged.

Q 47:- Two identical charged particles moving with the same speed enter a region of uniform magnetic field B. If one of these enters normal to the field direction and the other enters along a direction of 30° with the field, what would be the ratio of their angular frequencies?
Ans:- As angular frequency ω = qB/m is independent of the angle of entrance of a charged particle in a magnetic field,

Q 48:- A current- carrying circular loop lies on a smooth horizontal plane. Can a uniform magnetic field be set up in such a manner that the loop turns around itself (i.e., turns about the vertical axis).
Ans:- No, it is not possible because for turning of loop about the vertical axis the torque τ acting on current- carrying loop must be in the vertical direction. However, `\vec{τ}=I\vec{A}\times\vec{B}` and for a horizontal loop A must be in vertical direction. So, `(\vec{A}\times\vec{B})` would always be in the plane of the loop itself for any value of `\vec{B}`.

Q 49:- What is the effect in a vertical spring carrying a weight when a current is passed through the spring?
Ans:- As the current passes through the neighbouring loops of sping in the same direction, these will attract one another . As a result, the spring contracts and the weight moves upwards.

Q 51:- An HT electric power line is carrying current from west and east. Will the power line experience a force due to horizontal component BH of the Earth's magnetic field? If yes, in what direction?
Ans:- The electric power line carries current from west and east along horizontal direction and horizontal component of earth's magnetic field is from south to north. As I`\vec{dl}` and `\vec{B_H}` are mutually perpendicular, the power line must experience a magnetic force due to `\vec{B_H}`. As per Fleming's left-hand thumb rule, the force is directed in the vertically upward direction.