Science is a complex and challenging subject, as it involves so many principles and concepts that are difficult to memorize. Those student who opt for science have to face many challenges and work hard to get good marks in the exam. In this lesson, students will learn about Alternating Current. The best solution of the problem is to practice as many Physics Class 12 Chapter 7 Important Questions as possible to clear the doubts. 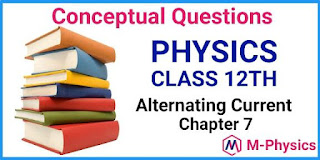 Q 6:- What is a phasor and a phasor diagram?
Ans:- A phasor is a vector which rotates about the origin with angular speed are represented by phasors. The analysis of the use of a phasor diagram.

Q 9:- What is the power consumed during one complete cycle in:

Ans:- The net power consumed during one complete cycle is zero for:

Q 16:- Mention the two characteristic properties of the material suitable for making core of a transformer.
Ans:- The material used for making the core of a transformer should have high value of magnetic permeability but a low value of magnetic hysteresis so that magnetic flux linked with each turn of primary or secondary coil is large and energy loss due to hysteresis phenomenon is the least possible.

Q 18:- When a value is given for AC voltage or current,to which quantity does it correspond to:

Ans:- The value given for an alternating voltage or current is ordinarily the rms value . When we say that a fuse of 5A rating is to be used, it means that rms value of current should not exceed 5 A.

Q 19:- Can you define one ampere of AC in same way as for DC? If not, how can we define 1 ampere of AC?
Ans:- Although both AC and DC are measured in amperes, we cannot define 1 A AC in terms of mutual attraction force between two parallel straight wires carrying current as in DC. An alternating current changes its direction and the average attractive force would be zero. One ampere of rms value of an alternating current in a circuit is the current which produces the same average heating effect as 1 A of DC would produce under the same condition.

Q 21:- What is a choke coil? What is its function?
Ans:- A choke coil is an inductor of large inductance L and the least possible resistance. When connected in an AC circuit, it reduces the circuit current without dissipation of power. The coil offers a reactance. Hence, impedance of circuit increases and circuit current is reduced. However, the choke coil does not dissipate any power because V and I differ in phase by π/2 in an inductor.

Q 24:- In India, domestic power supply is at 220 V, 50 Hz while in USA, it is at 110 V, 60 Hz. Give one advantage and one disadvantage of 220 V supply instead of 110 V supply.
Ans:- In India, domestic power supply is at 220 V as compared to 110 V in USA. Its advantage is that for a given power at higher voltage of 220 V, the circuit current I is less, hence may use a thinner line wire. On the other hand, the disadvantage is that the insulation coating of the line wire must be of superior quality so as to withstand a higher voltage.

Q 27:- At an airport,a person is made to walk through the door way of a metal detector, for security reasons. If he/she is carrying anything made of metal, the metal detector emits a sound. On what principle, dose this detector work?
Ans:- The metal detector works on the principle of resonance in AC circuits. When a person walks through a metal detector, he is in fact walking through a coil of many turns, which is connected to a capacitor tuned so that the circuit is in resonance. When a person walks through with metal in his/her pocket, the impedance of the circuit changes and it results in significant change in the circuit current. The change in current is detected and the electronic circuit causes a sound to and the electronic circuit causes a sound be emitted as an alarm.

Q 28:- In a step-up transforms, a high voltage AC is obtained by supplying a low voltage AC. Does it contradict the principle of conservation of energy?
Ans:- Although a step-up transformer changes low AC voltage into high AC voltage output signal, yet it is strictly in accordance with the principle of conservation of energy. It is because a step-up transformer increases the magnitude of voltage in secondary but the current in the secondary is less so that even for an ideal transformer, the output power is just equal to the input power. Mathematically, _. Thus, total energy remains conserved.

Q 33:- Can you measure DC by using an AC ammeter?
Ans:- Yes, an AC ammeter can be used to measure both AC as well as DC because working of an AC ammeter does not depend on the direction of current.

Q 34:- Why is AC more dangerous than DC of the same voltage?
Ans:- An AC is more dangerous than a DC for the same voltage. Let the voltage be V volt. In DC, the voltage remains steady at V volt. However, in case of AC. it is the rms value and the peak voltage `V_0=\sqrt{2}` V volt. [For household circuit of 220-volt AC, the peak voltage is 311 volt]. Thus, in an AC, the voltage fluctuates from 0 to V √2 volt and will cause more harm to the human body that V volt DC.