An introduction to standard forms explained with examples

In mathematics, we strive to express everything logically in order to capture the reader's attention. If we face a number like 10900000000 which is

In mathematics, we strive to express everything logically in order to capture the reader's attention. If we face a number like 10900000000 which is difficult to read and the probability of error in reading and writing increases. The standard form has a key rule for the development of very big and small data values. This article explains the definition of standard form numbers, as well as applications and examples with step-by-step solutions. 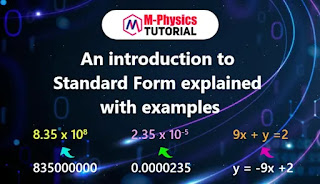 What is the Standard form?

The standard form of a number is defined as “Any number between 1 to 10 multiplied with some power of 10”. We write it as a x 10n where 0 < a < 10 and n is an integer. The standard form is also called scientific notation. We can also replace 10 with e which is called the exponential standard form. The number also changes in the engineering notation.

We cannot count a large number of values, such as 300000000 m/s, which is the speed of light. To reduce such difficulties, we write such large values in a standard notation which is called scientific notation. Similarly for very small values such as 0.00000000000000248, we change this small value in the standard form which helps us to read and understand the values easily.

How to solve standard form problems?

To change the given number in standard form we have followed some rules.

To understand the conversion of a number in the standard form with the help of the following examples.

We solve the solution in the standard form by following the given steps.

Step 1: Write the given number.

Step 2: Identify the location of the decimal point in the number. We can observe that the decimal is on the left side of the number after seven digits.

Step 3: Decimal will be moved left to right and placed after the first non-zero digit. It will be

Step 4: Count the number of digits that we have moved the decimal. And right then that number is in the exponential of 10. We move six digits from left to right.

Step 5: We move the decimal from left to right that’s the way the power of 10 must be with a negative sign.

The above example can also be solved by using a standard form calculator to get the result in a fraction of a second. 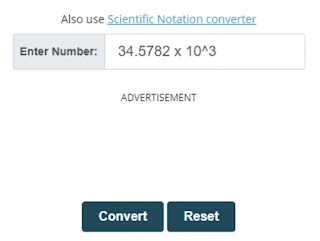 We solve the solution of the given number by following the steps.

Step 1: Write the given number.

Step 3: Now we move the decimal from right to left side. And place at the 1 st non-negative digit

Step 4: Count the number of digits we move the decimal from right to left and write the number in the power of 10.

Step 5: we move the decimal from right to left so the exponential of 10 must be positive.

Change 34578.2 into the engineering notation.

Step 1: Write the given value.

Step 2: Change the multiplication form so that the exponential of 10 is divisible by 3.

In this article, we have learnt about the need for standard form, definition, examples, and application. After this article, you are able to convert any large and small value into a notation that is easy to read and helps to reduce human mistakes which often occur in the reading.