Statistical Mechanics is the branch of science which establishes the interpretation of the macroscopic behaviour of a system in terms of its microscopic properties. The study of statistical mechanics can be divided mainly into following two categories

The classical statistics or Maxwell-Boltzmann statistics utilises the classical results of Maxwell law of distribution of molecular velocities and Boltzmann theorem relating entropy and probability. The quantum statistics was developed by Bose, Einstein, Fermi and Dirac. One form is known as Bose-Einstein statistics while the other is known as Fermi-Dirac statistics. 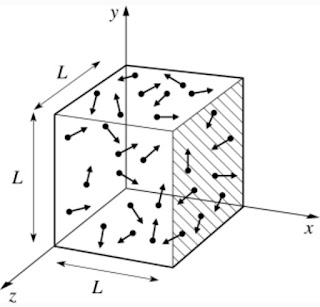 The classical statistics explained successful many observed physical phenomena like temperature, pressure, energy etc. But could not explain adequate several other experimentally observed phenomenon like black-body radiation, specific heat at low temperature etc. For explaining such phenomenon Bose, Einstein, Fermi and Dirac made new approach by using new quantum idea of discrete exchange of energy between systems. The new statistics, known as quantum statistics, was subdivided into two categories :

The first of these holds goods for photons, while the other for elementary material particles. The classical statistics is only a limiting case of quantum statistics.

A macrostate of the ensemble may be defined by the specification of the number of phase points in each cell of phase space.

In classical mechanics, the instantaneous positions of a single particle is determined by three independent coordinates x, y, z and the instantaneous motion of a particle is described by velocity components (vx, vy, vz) or more conveniently by momentum components (px, py, pz). As a purely mathematical concept we may imagine six dimensional space in which dx, dy, dz, dpx, dpy, dpz is an element of volume and the positions of a point particles in this space will be described by a set of six coordinates x, y, z, px, py, pz. This six dimensional space for a single particle is termed as phase space and particularly the μ-space.