Bose-Einstein statistics is obeyed by identical, indistinguishable particles of integral spin that have symmetrical wave functions and is so named

This statistics is obeyed by identical, indistinguishable particles of integral spin that have symmetrical wave functions and is so named as it was devised by Bose for light quanta and generalized by Einstein. 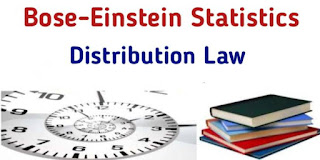 Bose utilized Planck's hypothesis of quantum theory, according to which the radiation in a temperature enclosure is composed of light quanta of particles of energy hν, where ν is the frequency of the quanta.

In the kinetic theory of monoatomic gas Einstein assumed that the molecules of the gas are like light quanta, indistinguishable from one another : but in the light quantum case, the number of molecules is conserved.

Consider a system having n distinguishable particles. Let these particles be divided into groups or lavels such that there are (n1, n2, n3,……ni) number of particles in groups whose approximate constant energy (ϵ1, ϵ2, ϵ3,…… ϵi) respectively. Let gi be the number of eigen states of the ith level.

The basic assumption in Bose-Einstein statistics is that any number of particle can be in any quantum states and that all quantum states are equally probable. Suppose each quantum state corresponding to any elementary cell in the phase space, the number of different ways in which (ni) indistinguishable particles can be distributed among (gi) cell is

When the number of cells is sufficiently large, we can write the above expression as

The probability P of the entire distribution of N particles is the product of the number of different arrangement of particles among the states having each energy. Thus,

The condition of maximum probability gives

For the equilibrium state, we must have δ(log P) = 0

Subject to the limitations

Applying the lagrange method of undetermined multipliers i.e., multiplying eq. (7) by α and eq. (8) by β and adding the resulting expression to eq. (6), we get

As the variation δni are independent of each other, we get

This is known as Bose-Einstein distribution law. It explains successfully the laws of black body radiation.